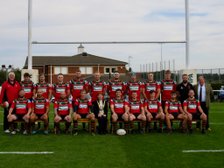 TAKING OUT THE ASH!

Previous matches with Ashbourne have always been close hard fought affairs with the spoils generally going to the home team. I cannot recall winning there in recent seasons. Big challenge for the boys today.

Dronfield scored the first try on 4 minutes when a good break by scrum half Jake Steade was followed by a super kick to the corner by Centre Matt Hale for winger James Marshall to chase. The bounce favoured James as he gathered well to score under the posts. Conversion by Joe Farrell. 0-7

On 11 minutes Dronfield's second try followed from a well set up pack drive with Prop Paul Joyce making the touchdown. 0-14
Five minutes later and Ashbourne hit back with a try coming from a well weighted kick into the Dronfield in goal area with 3 chasers, (2 defenders and 1 attacker), missing the touch down before the scorer. 5-14

On 22 minutes more Dronfield pressure resulted in a penalty for not rolling away, safely slotted by Joe. 5-17

Before the break Dronfield went close again with some Luke style stepping by prop Joycey though the pressure from Ash was building.

Dronfield had to defend hard for most of the 3rd quarter until on 64 minutes when they attacked the Ash line with Full Back Farrell showing speed and stepping skills to cross the line and the strength to roll and place the ball, and its fair to say he was pleased! 12-24

Good to see Mike Wetherill making impact off the bench with an early return from injury to add power to the scrum.

Ashbourne were not finished yet and attacked and won the kick off to score a try. 19-27

On 78 minutes a break and a quick pair of heels from Fly Half Alex Arch secured a try bonus point and the win to make the final score 19-34.

Next week a home tie against newly promoted Ashfield.