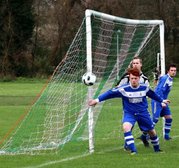 Coming up next – Supercala FC

the goals are really flowing at the moment

Well we definitely faced the Jekyll side of Old Roan last weekend as we ran out 10-0 winners! The game featured hat tricks from Charlie Boyles and George Ayles, as well two goals apiece from Jack Sparrow and Chris Plummer – the goals are really flowing at the moment. That’s twenty without reply in three games.

Now onto our next opponents; what do we know about them? Very little, other than they play in Junior Division Three of the Surrey South Eastern Combination League. Two games into their season their record reads one win and one defeat; five goals for and four against. Last season they finished mid table with ten wins and eight defats, scoring forty four goals in the process. Their best win of the season was 6-2 in the final league game; worst defeat 7-0 once and 6-0 twice.

With our current form we should be go into this game high in confidence but not complacent. Here’s hoping for a good run in the cup!