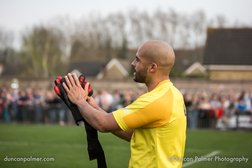 Preston Edwards was named as Dulwich Hamlet Supporters'Player of the Year, with other awards for Nathan Green, Jamie Mascoll & Thomas Chambers.

In a season where there has been a large turnover of players at the club, the consistent and popular keeper was named as the Supporters' choice as the outstanding player.

Edwards appeared in 40 of the club's 42 league games and made a total of 48 appearances this season. He has made 171 appearances for The Hamlet since his debut back in February 2016 and proved a model of consistency in the Dulwich goal.

This season brought accolades from fans for his goalkeeping skills, but also brought him publicity for his car parking skills, with national coverage following his parking prior to the friendly against Crystal Palace.

Other awards on the night went to Thomas Chambers, Nathan Green and Jamie Mascoll.

Chambers was named Youth Team Player of the Year, whilst Mascoll collected the Goal of the Season award for his volley in the home game against Dartford on March 2nd.

The first John Stephens Award, for the outstanding individual performance in a single game, was won by Nathan Green for his performance in the home 2-1 victory over Welling United on February 9th