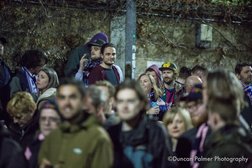 Dulwich suffered their second consecutive play off final defeat as they couldn't recover from a two goal deficit.

Dulwich made a bright start and Gavin Tomlin linked up with Ibra Sekajja in the first minute but the latter fired wide. However, it was the home side who gradually got on top.

The first Bognor attack should have seen them take the lead. A long ball over the top released Ollie Pearce and Michael Chambers had to get across to concede a corner. From the corner, Sami El-Abd headed over when unmarked.

From an 11th minute free kick floated in to the penalty area from halfway, El-Abd again rose highest but this time headed over the bar.

Dulwich finally had an opening in the 12th minute. Nyren Clunis put in a cross from the right that home keeper Dan Lincoln punched clear and, when it was returned into the box from the left, Gavin Tomlin saw his weak header easily saved.

Gavin Tomlin then came very close to giving Dulwich a 13th minute lead. He received the ball to the left of goal and managed to create space but his effort was inches wide.

Ibrahim Kargbo then seized on a loose pass in midfield but, after advancing to some 20 yards out from goal, he saw his shot blocked when the better option may have been to release Nyren Clunis on his right.

However, just as Dulwich looked to have settled into the game they fell behind in the 21st minute. A ball down the Dulwich right saw Marc Weatherstone slip which meant Ollie Pearce got in behind him. He rolled the ball across to the far post where Jimmy Muitt had the simple task of firing home.

The lively Ollie Pearce was just wide with an effort after he seized on a misplaced pass from Kenny Beaney but the next chance went to Dulwich when Gavin Tomlin fired a 31st minute free kick just wide.

Bognor then saw Gary Charman head too high from a corner before Gavin Tomlin's honesty denied Dulwich a penalty when he hurdled a wild challenge in the box rather than allow contact. His subsequent cross saw Ibra Sekajja fire wide at the far post.

Another wild lunge, this time on Nathan Green, gave Dulwich another free kick opportunity from around 25 yards out but Ashley Carew saw his free kick pushed away by Lincoln diving to his left.

El-Abd headed too high again from another corner before Bognor doubled their lead in the 42nd minute. A throw in on the Dulwich left led to an attempted volleyed clearance by Matt Drage. However, he got his contact all wrong and presented the ball to an unmarked Ollie Pearce who had the simple task of shooting past Preston Edwards.

Dulwich went in search of a goal before the break that would give them a way back into the game but a good cross from Ibra Sekajja found no Dulwich player able to get on the end of it.

Dulwich had an early free kick opportunity after Ashley Carew was fouled but couldn't trouble Lincoln. However, the better chances were still going to the home side.

A Dan Beck free kick was deflected wide and El-Abd had another header that Preston Edwards tipped over. For Dulwich, Gavin Tomlin twisted and turned to create space but his effort was deflected over,

Bognor then passed up an opportunity to kill off the game as a contest in the 63rd minute. Harvey Whyte was allowed to run unchallenged from right back and was sent crashing in the box by Kenny Beaney. James Fraser stepped up but his penalty was pushed away by Preston Edwards diving to his right.

This save meant Dulwich still had a chance and ,after Pearce had placed a header too high, Dulwich finally created a couple of half chances. First, Ibra Sekajja couldn't stretch enough to get on the end of a Nyren Clunis cross and then Clunis had a low effort saved by Lincoln.

However, Dulwich did find a lifeline with a fantastic strike from Ibrahim Kargbo with 13 minutes remaining. A Nyren Clunis cross was met by Kargbo with a beautifully struck volley from just outside the penalty area that beat Lincoln high to his left.

Dulwich now committed players forward in search of an equaliser but they were unable to create anything until stoppage time when Lincoln comfortably saved from Ashley Carew.