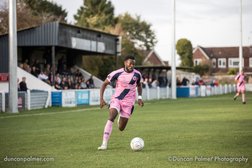 Dulwich left Dartford frustrated that they collected no points after two controversial decisions from the referee presented Dartford with both goals.

The match started evenly, with neither side able to create any chances in the opening minutes,with the first real chance arriving in the 13th minute., a Greenhalgh cross created a sight of goal but the chance went due to poor control.

Dulwich were next to threaten in the 18th minute, as clever interplay on the left almost left Dipo Akinyemi in on goal; the ball being hacked clear as home keeper Ibrahim advnaced.

However, just a minute later The Hamlet grabbed the lead with a spectacular strike from Akinyemi. He received the ball 25 yards out, turned and thumped a shot that beat Ibrahim for pace as it flew over his despairing dive.

Dartford pressed for an equaliser and a low cross from their left saw an effort that went straight at Preston Edwards, whilst an unmarked header from a free kick sailed harmlessly over. Greenhalgh wasted another chance when he cut in from the left but fired too high whilst another header ended up on the roof of Edwards' goal.

A poor defensive clearance let in Sheringham but he shot straight at Preston Edwards, who also made a fine save to his right as Dartford stepped up the pressure on the Dulwich goal.

Another Greenhalgh free kick was fumbled by the Dulwich keeper but the effort was then blocked at the expense of a corner.

Just as it seemed Dulwich would get to the half time interval with their lead intact, Dartford equalised. A clearance was clearly controlled by a Dartford player's arm and the ball broke straight from it to Philpot who, with Hamlet players all waiting for the referee's whistle, placed the ball past Preston Edwards.

It was Dulwich who opened the second half on top and Michael Chambers headed over the bar from an Ashley Carew free kick, whilst Ibrahim saved low to his right from Dominic Vose.

However, it was Dartford who took the lead on the hour. Ferguson's pass was short to Okuonghae and Philpot nipped in to beaqat the Dulwich defender an race in on goal. As he tried to go around Preston Edwards, he clearly lost control of the ball and, as the Dulwich keeper touched it wide for a corner, the Dartford striker dived over the Dulwich keeper.

This clear dive was missed by the officials and instead the referee pointed to the penalty spot and booked the Dulwich keeper. Sheringham blasted the penalty high past Edwards.

This second error knocked Dulwich out of their stride and gave Dartford a lead they seemed content to defend as The Hamlet were unable to exert much pressure.

Nathan Green went tumbling in the box, but this time the referee decided that there had been a slight touch on the ball prior to the follow through in the sliding challenge.

With Dulwich pressing, Ibrahim just grabbed another Akinyemi effort at the second attempt as Tomlin tried to turn the loose ball home. Tomlin was then brought down on the edge of the penalty area but Ibrahim was able to get across his goal and push out Carew's free kick.

Although Dulwich battled to the end, their efforts were in vain as the home side collected the three points and Dulwich players, management and supporters were left to rue the errors that cost them any points.