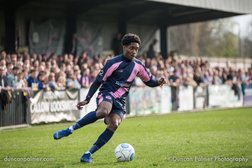 A good first test for the new look Hamlet side saw them lose to two second half goals.

Dulwich paraded their host of impressive new signings, with the majority impressing during the first half that was evenly contested.

It was Dulwich who nearly went ahead in the 14th minute when Nyren Clunis latched on to a flick from Danny Mills. However, his curled effort came back off the post.

Colchester went equally close when Senior saw his long range effort tipped on to the bar by Charlie Grainger, whilst he also produced a good low save from then same player.

Close to half time e Nyren Clunis saw his cross shot scrambled behind for a corner as the half ended scoreless.

A much changed Dulwich side fell behind in the 52nd minute when a low shot from Senior squirmed under Preston Edwards.

However, Edwards produced a stunning save from Senior just before the hour, but just a minute later the visitors doubled their lead when Sowunmi was left unmarked to head home.

The away side remained in control for the rest of the game, but there were no further goals.