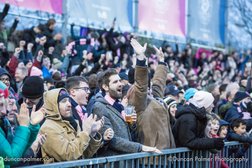 In front of another big crowd, The Hamlet produced an excellent performance to halt Dartford's recent good run.

For the Dulwich line up visit here

Gavin Rose shuffled the pack following the disappointing display at Torquay and was rewarded with an excellent performance.

With the birth of his second child delayed, Preston Edwards reappeared in goal and there was a home debut for combative midfielder Aryan Tajbakhsh. Loan signings George Essuman, Luke Wanadio and Jamie Mascoll also started.

Dulwich opened nervously and Jamie Mascoll conceded a corner following a free kick, but the home side soon got into their stride. Dipo Akinyemi found space in the 6th minute but his effort was blocked for a corner, whilst George Essuman's header across goal from a corner was behind onrushing players.

Nathan Ferguson was pulling the strings in midfield and he created a crossing opportunity for Nyren Clunis in the 17th minute, whilst Nathan Green saw a couple of efforts well blocked.

However, Dartford looked lively as well and Michael Chambers had to cut out a cross from Greenhalgh just three minutes before Dulwich took a 27th minute lead. A cross from the right by Nyren Clunis was delivered beyond the far post. it was met by a brilliant volley from Jamie Mascoll that beat Bailey Vose in the Dartford goal low to his right.

Dartford could have been back on level terms five minutes later but Roberts wasted a good opportunity after Nathan Green had given the ball away. Michael Chambers conceded a free kick in a dangerous position but Greenhalgh placed his effort wide, whilst Chambers also had to concede a corner from another free kick.

However, Dulwich made it to the break with their lead intact, and Nyren Clunis and Dipo Akinyemi both had efforts that could have extended the lead.

Dulwich opened the second half well, with Dipo Akinyemi getting into the penalty area but he saw his effort blocked, before Dartford threatened when Wanadio lost the ballin midfield.

Nathan Green forced a comfortable save from Vose in the Dartford goal before Preston Edwards was forced to produce a comfortable save when McQueen broke away from the defence. Dipo Akinyemi then wasted a good chance for The Hamlet in the 55th minute. Luke Wanadio set him on a run but he blazed his effort way over the bar.

Dartford again went close in the 59th minute after Mascoll gave the ball away. Noble picked it up and crossed for Roberts, but his header went wide, whilst The Hamlet were also foiled by Vose when he saved from Akinyemi.

Preston Edwards then made a fine fingertip save from a McQueen effort that looked to be arrowing into the bottom left corner of his goal, and had to rush to make a save at the feet of Roberts after Dominic Vose had given the ball away.

As the crowd awaited the board indicating how long they would have to survive, The Hamlet settled the match with a second goal. Good play on the left saw the ball played to Michael Onovwigun whose effort from the edge of the penalty area was spilled by Vose. Fellow substitute Decarery Sheriff was fastest to react and poked the ball home.

Six minutes of added time followed but Dulwich were never unduly bothered by Dartford's efforts to get back into the game.