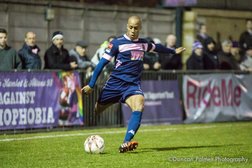 Dulwich came from two goals down to salvage a draw and will now travel to Royston on Tuesday.

Gavin Rose was forced into a number of changes as injuries bite hard on the squad. Kenny Beaney was absent after having over 20 stitches in the head wound he sustained against Staines Town, whilst Dumebi Dumaka hadn't recovered from his injury picked up in the same game.

Royston boasted a number of experienced players with higher level experience and worked hard to prevent The Hamlet playing out from the back.

Their standout player Scott Bridges blazed an early chance over the top as Dulwich took time to settle. Dulwich looked to get Sanchez Ming and Nathan Green high up the pitch and were dangerous once they managed to move the ball into midfield.

Nathan Green had a cross cut out following a typical marauding run down the left and Matt Drage found Gavin Tomlin with an accurate long pass. Drage then went close with a header from a corner.

However, Royston were always dangerous in attack and a cross from Stuart Bridges was just too high for Frendo. At the other end, great link up play between Sanchez Ming and Gavin Tomlin saw Nyren Clunis head over.

As the game swung from end to end, Michael Chambers had to block two efforts on goal which immediately led to a break from Nyren Clunis that forced a corner at the other end. The next chance fell to Royston but Frendo couldn't hit the target after Ashley Carew was dispossessed.

A fine interception on the half way line from Sanchez Ming saw him embark on a gallop forward that saw his shot pushed out by Welch in the Royston goal. The ball came out to Nathan Green but he blazed over.

Just past the half hour a cross from Josh Castiglione was sliced just wide of his own goal by Michael Chambers who shortly afterwards sustained a facial injury that meant he did not return for the second half.

Danny Carr came on in place of Chambers at the start of a second half that took a little while to warm up. However, it was the visitors who took a 56th minute lead. A cross seemed to result in Marc Weatherstone and Preston Edwards both leaving it to each other and John Frendo expertly headed home from a tight angle.

Seven minutes later it got worse for The Hamlet when Scott Bridges curled a delightful free kick from 25 yards around the wall and into the goal just inside Preston Edwards' near post.

With their situation looking critical Dulwich needed to strike back quickly and managed to do so just two minutes later. The ball reached Nyren Clunis some 20 yards out and to the left of goal. He cut in on to his right foot amd fired a fine low effort past the unsighted Welch to give Dulwich hope.

The home side thought they should have had a penalty when Gavin Tomlin seemed to be bundled over in the box but the referee was unmoved. However, they should certainly have levelled in the 78th minute when Ibrahim Kargbo dwelled too long when a free kick caused confusion in the visitors box.

As Dulwich pushed for an equaliser, Nathan Green rifled a cross that flew across the face of goal and Clunis had a header saved. Good play from Danny Carr saw his centre find Clunis but he shot wide when well placed.

With two minutes remaining Dulwich found the equaliser. Danny Carr received the ball with his back to goal before turning and unleashing a terrific effort from 25 yards that flew past Welch low to his left.

Dulwich now sensed that they could win it but as they pressed forward Ibrahim Kargbo was on the end of a very late tackle from Scott Bridges which was the catalyst for some unsavoury scenes by the dugout areas.

The end result of the fracas was that both managers found themselves dismissed along with Gavin Tomlin for The Hamlet and Royston keeper Joe Welch who had sprinted from his goal to become involved.

With Royston having to survive stoppage time with an outfield player in goal Dulwich saw a chance to win but could only muster a cross from Sanchez Ming that almost slipped under his body at the near post.

Vote for the Supreme Engraving Awards UK Dulwich Hamlet Man of the Match by using the message boards, website poll or sending a text to 07939 573026