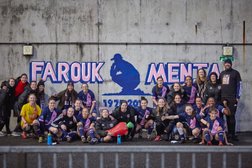 In what was always going to be an emotional afternoon, Dulwich Hamlet put in a memorable display against QPR in a day of celebration for Farouk Menia, their coach who recently passed away.

QPR arrived at Champion Hill with a 100% record but it Dulwich who started the game brighter and kept up the momentum to finish with all three points, which lift them back to 1st in the league table.

Dulwich worked the flanks early on, utilising the pace of wide players Sarah Milner and Lucy Monkman. Goalkeeper Kate Aldridge had a couple of saves to make but was untroubled.

QPR upped the pressure but Dulwich coped well, and just before half time launched the counter attack which would lead to the opening goal of the game. Clearing their lines from a corner, the ball came to Ella Wales Bonner, who fed Ana De Pellegrin to put her through one-on-one with the keeper. De Pellegrin kept her cool and slotted it home, unfazed by the defender in chase.

The job was only half done and the midfield pair of captain Brit Saylor and Rosie Stone continued to break up the QPR play in the centre of the pitch and also allow Wales Bonner the freedom to drive forward.

Manager Ryan Dempsey made his first changes with 20 minutes to go, bringing on Liz Wickes and Saskia Philp to play on the wings. Their fresh legs allowed Dulwich to maintain their high energy levels and kept the QPR defence busy.

On the 76th minute, the ball fell to Wales Bonner on the edge of the box and she unleashed an unstoppable volley to double Dulwich’s lead. The celebrations were huge and victory was within sight.

When the final whistle went, chants of “We are top of the league” rang out at Champion Hill and would continue into the evening at the Clubhouse Bar. At the halfway point of the season, Dulwich had sent a powerful statement to their opponents and ended their unbeaten run.

More importantly though, the team had won the game for Farouk with a stylish performance in which every player had worked tirelessly for each other. It was a fitting tribute to a man who lived and breathed the game and to whom the club will be eternally grateful.

The team have set up a GoFundMe page, to provide support for his two young children during this difficult time. This can be found here.