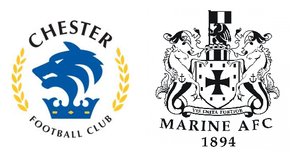 Dulwich take on Chester on Friday night at 7:45pm at the Deva Stadium, before travelling to Liverpool on Saturday where they will play Marine at 1:00pm.

Chester finished 9th in the National League North last season and this fixture should provide Dulwich with a competitive test against a side in a parallel division.

Of the current Dulwich squad, Dominic Vose and new signing Christian Smith have both previously had spells at Chester so Friday’s game will be in familiar surroundings for them.

Saturday’s fixture against Marine is laced with history and will be a repeat of the 1932 FA Amateur Cup Final. Dulwich won 7-1 that day on an incredibly muddy Upton Park pitch in front of a crowd of over 22,000. Marine have very kindly invited us to play as part of their 125th anniversary celebrations.

Tickets for the Marine game are as follows: Adults £5, Concessions £3