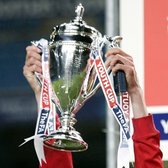 The FA Youth Cup second round proper draw was made at Wembley Stadium this morning and evoked some nostalgic feelings here at Champion Hill. Though only one first round proper tie has been completed and several of the final round qualifying are still to be played, the draw has a cluttered look about it.

However ahead of the eventual winners of Dulwich Hamlet Under 18s trip to face their counterparts from the Met Police could be a gruelling trek into the depths of the West Country with Yeovil Town, Forest Green Rovers or Hungerford Town lined up to host that second round proper tie.

For Dulwich fans the draw brings back memories of one of those great Champion Hill evenings. Back in November 2010, the youngsters were drawn at home to Yeovil Town having survived a scare at Northwood in the previous round when ‘keeper Anthony Page saved a vital penalty. It was a real gung-ho cup tie, Yeovil taking the lead before Paul McCallum equalised. The Somerset side went back in front early in the second half but once more McCallum struck to send the tie into extra time. By this time the visitors had been reduced to ten men and the advantage told as McCallum completed his hat trick to set up a home tie with Newcastle United. Along with McCallum the Dulwich squad that night included Ethan Pinnock, Michael Chambers and Quade Taylor.

The arrival of winter put that Newcastle United tie back to early January but with 400 or more packed into Champion Hill, many making the long journey from the North East, the Geordies were stunned by an early goal from Omarr Lawson. The ‘Toon levelled but it was still 1-1 at the break with Hamlet fans dreaming something magical. Unfortunately, the magic came from the young Geordies who upped the ante after the break, and though Luke de Freitas would score the goal of the night it would be 6-2 by the final whistle.

The full draw is as follows: