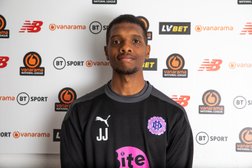 After many years of service as a player and as a coach, JJ departs for new challenge at Herne Bay.

As a club we would like to bid a fond farewell to our coach Junior James, who has moved to Isthmian League Premier Division outfit Herne Bay in an Assistant Manager role.

Junior has been a familiar figure at the club for more than a decade, firstly as a player under Gavin Rose as a forward, playing alongside his brother Kevin, and being part of the Isthmian League Division One South side which were crowned champions on the final day of the 2012-13 season.

In more recent times JJ has been a key figure on the touchline in a coaching capacity, firstly working with youngsters in the academy before joining Gavin and Junior Kadi on the bench for the first team after Kevin left, and has been a big part of our life in the National League South since we were promoted in 2018.

Speaking about his departure to Herne Bay, Gavin said "Junior leaving is a bit of a bittersweet feeling, as part of being Aspire we try to give opportunities for people to grow, and since he stopped playing with us JJ started doing some coaching, voluntarily at first, which is a huge credit to him, before we got him a paid role at the academy, where he developed really well and moved into the first team."

"He has helped us immensely in the last two or three years and it has been great to see him grown and do incredibly well, and the opportunity to go to Herne Bay and be the assistant manager allows him to grow further. He has been part of the fabric of what we have done in recent times, but I hope JJ can go on to bigger and better things, and have to thank him for everything he has done for me and Kads and the club."

Junior, from everyone at the Hamlet, we wish you the very best in your new job at Herne Bay, and thank you for your time with us, as both a player and a coach, you will be sorely missed.