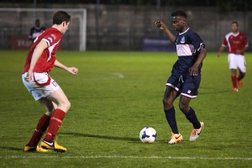 Having impressed in games against the likes of Chelsea, Arsenal, West Ham and Leicester, the Premier League Club felt he warranted an opportunity to further progress his development with the club.

A home grown talent from the A.S.P.I.R.E Academy, first joining as a 14 year old, Diallang has developed excellently over that period. This culminated in some very strong performances in this season's FA Youth Cup competition and he has also had a few outings in the senior side's cup competitions.

As a club, we are very proud of Diallang's achievements and wish him every success in his future career.