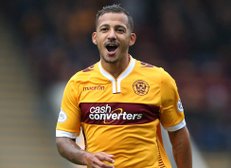 The club are pleased to announce the signing of Lionel Ainsworth, while Nathan Smith also signs a long-term contract

Lionel Ainsworth, most recently of Weymouth, has signed for Dulwich Hamlet and is available for selection today.

Ainsworth is a winger and played in the recent fixture between the two sides at Champion Hill in October, getting himself on the scoresheet with a memorable strike from the edge of the area.

A former England youth International, Ainsworth has enjoyed a seasoned career both in England and Scotland, and brings a wealth of experience to the Dulwich squad. He made his senior debut at Derby County in the Championship in February 2006.

Over the next eight seasons, he would play for several clubs including Watford, Huddersfield Town, Shrewsbury Town and Rotherham United.

In August 2013, Ainsworth joined Motherwell on loan, a move which became permanent the following year. Over his four seasons in Scotland, he made 138 appearances, scoring 27 goals and registering 29 assists.

Manager Gavin Rose said, “Lionel has trained with us for the past week having started the season with Weymouth, only leaving due to travel commitments. He caught our eye with a good display, capped with a good goal when the teams met.”

“Lionel has a very positive attitude and I believe his professionalism will be a massive addition to the group.”

Meanwhile, defender Nathan Smith has also signed a contract with the club. Smith has made two appearances for Dulwich already this season.