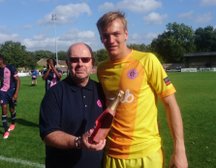 Man of the Match vs St Albans City - Ashley Maynard-Brewer

A dramatic afternoon at Champion Hill ended with a late own goal to give Dulwich a 2-1 victory and maintain their 100% record so far this season.

Goalkeeper Ashley Maynard-Brewer, currently on loan from Charlton Athletic, was presented with the Man of the Match award by Andy Greig of the matchday committee after the game.

Maynard-Brewer made a string of saves to keep Dulwich in the game, as they held on with ten men to secure the three points. The young shot stopper has played every game this season since joining on loan and has impressed in each of his performances so far.

Dulwich are back in action on Tuesday night, away to Hemel Hempstead Town at 7:45pm. We are back home on Saturday 17th to face Concord Rangers at 3pm.

Tickets for the Concord game can be purchased here.