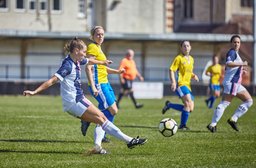 Brit Saylor has had a busy summer. The captain of the newly relaunched Dulwich Hamlet Women’s team has played - and watched - a lot of football and she has been an integral part of the club’s transition from AFC Phoenix.

Pre-season was hard. Dulwich played against four competitive sides, who are all above them in the football pyramid. A 1-0 win over Crystal Palace was sandwiched between defeats to Leyton Orient, AFC Wimbledon and Crawley Wasps. However, it was all part of the plan to get the team ready for the new season.

“The strategy was to go in playing teams above us or well above us so that we could test ourselves, because our goal is to be in the league above us next year,” she says. “We wanted to test ourselves against those types of teams to see where we were, what we might need to work on and how we’re going to get there.”

In reality, the gulf was less than expected. “I didn’t think it was going to go poorly but I’m just really impressed by how we held our own,” she continues. “So they were tough games, we didn’t have the results that we wanted from them from every game but we did have a lot of learning within that time and it was a good experience for us.”

Saylor radiates positivity and there is plenty to be optimistic about for their new season with Dulwich Hamlet. The step-up in the quality of the team’s facilities is already making a big difference. “We went from Edward Alleyn Club, which is good, but you don’t have the facilities to be able to actually support people coming to watch. So going from having our family and friends there to watch, to having actually community supporters,” she says.

“The first game was over 250 people. Just having that level of support before people even seeing us was insane. Having access to the facilities we have access to. The pitch is obviously incredible. Even just minor stuff that we now no longer have to think about. Farouk [Menia], our coach, used to make sandwiches for after the game but he doesn’t have to think about that anymore! Overall, it’s been tough game-wise but it’s just a sick experience all around. We’re all buzzing!”

Saylor feels the decision to merge AFC Phoenix with Dulwich Hamlet to create the new Women’s team was both a natural and an obvious one. “We were just thinking, ‘What men’s team is close that doesn’t already have a women’s club but likely to want to have a women’s club?’ and Dulwich was pretty much the only option for us.”

“We discussed it internally and everyone was like, ‘This is amazing’. Some people were obviously hesitant, because we didn’t want to sell our souls. We have a personality as a club. We’re very independent, we’re progressive. We would never tie ourselves to things we don’t align to, sponsorship-wise. We wanted to keep our identity and that was very, very important to us.”

“I think one of the reasons we don’t have high player turnover is just because of our culture. We’re mates - we party together, we have dinner together. Our best friends are within the team. We really want to keep our identity but we know slightly, to get where we want to be, we’re probably going to have to merge with someone who has our beliefs but also can help grow it more.”

Once the merger had happened, the players were quickly integrated into the club and having upped their training schedule from one to two nights a week, they’re embracing being a part of Dulwich Hamlet.

“We get pretty much everything the men’s team get. Without a question - and there is no question around it, and that was something that was important to us, we didn’t want to be second rate kind of thing. It’s turned out amazingly. “

“Everybody’s buzzing. Everybody wants to help and everybody wants to be involved. That’s just the kind of attitude we need internally and throughout the community. It’s been awesome. It feels like a very important place for people to meet and kids and families to come, to just enjoy themselves.”

“I know that they do a lot for the LGBTQ community, which is very important especially for our team. It’s really amazing to be a part of that. We’ve already got involved in some community work with some of the primary schools doing Saturday sessions. It’s nice to be involved in that way. We’re already thinking about how we get a development team for the girls.”

Saylor has been obsessed with football for 20 years now. She has fond memories of watching her home country, the USA, host and win the Women’s World Cup in 1999. “The 1999 World Cup, when the USA won - that’s when I was hooked! That final hooked me. Everything from then on was soccer.”

Growing up in New Haven, a small town in the state of Indiana, Saylor was quickly taking in as much football as she could. “I played for my school. Then in the winter, because obviously it’s quite snowy in Indiana, I played indoor football. Once the spring came, I played for a club. So I played all year round for quite a few years.”

“I got a scholarship to play at University. I played in Indiana, in Division 1 - which is the highest collegiate level you can play in. I played there for four years, the most you can play. After that I played a little bit of semi-professional club football but after that I moved to South Korea and I played there with a men’s team, as they don’t really have women’s teams.”

Saylor was able to celebrate another World Cup triumph for the USA this summer and enjoyed watching the competition in France. “I went to quite a few games,” she says. “The USA winning obviously is awesome. But also I got to see USA v England. The fact that England did so well, when I saw that game it felt like a win-win situation for me. I’ll be a bit upset for USA, but I’ll be buzzing if England win. It was amazing.”

Living with her teammate Lucy Monkman and regularly hosting Zoe Elmore, it can sometimes feel like Saylor is trapped inside a football bubble. “Lucy and I live together and Zoe stays with us three days a week. There’s kit everywhere, there’s boots everywhere - sometimes we can’t get around the flat! But I wouldn’t have it any other way. It’s the best being surrounded by it.”

That team camaraderie is going to be a vital part of the success Dulwich can achieve on the pitch and it runs through the whole side. “Every practice we had, there would always be girls on the team who would say “Are you coming back? We’d love to see you again!”. They’re just lovely. We had socials where we all got on. We’re all competitive but we have an inherent respect for each other.”

“We actually all really enjoy e