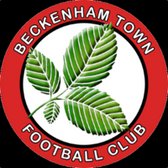 You may be kicking your heels, but The Hamlet are back in action on Tuesday!

Beckenham Town is an easy ground to get to, only a few minutes walk from Eden Park station, which is on the Hayes(Kent) line from central London.

The ground is a tidy venue, well respected throughout non-league football in the south-east of England for its excellent playing surface. There are small stands on both sides of the ground, and areas of cover behind the goal at the clubhouse end, as well as along the sides. The covered standing areas, incidentally, were salvaged from the remains of the old Fisher Athletic ground, at Salter Road, in Rotherhither, where they formed part of the Dockers Stand.

Several bus routes pass by, the 194, 356 & 358. The 194 starts at Sydenham (Bell Green) & goes via Penge; whilst the 356 can be boarded at Horniman’s Museum, or in Forest Hill & goes via Penge as well. And the 358 begins at Crystal Palace, going down through Anerley, also via Penge. All of these give you options home if you miss the last train…
If you are driving then the approximate postcode for your Satnav is: BR3 3JL
There is a nice little bar & tea bar inside the ground, while out on the main road, as well as few shops, is the Eden Park Toby Carvery, which is popular for pre-match food and drink with quite a few of our fans whenever we visit.

Not far away, but sadly closed on Tuesdays, but still worth a mention if you are in the area another time, is the Bethlem Museum of the Mind.
If you venture a mile away or so onto Beckenham High Street, for those with pre-match time on their hands, there is a variety of local and chain shops, as well as several eateries & pubs. If you’re into unusual architecture keep an eye out for the Chinese Garage, now a listed building. It is built in an unusual Japanese pagoda style. Worth a visit if you like churches is the parish church of St. George’s, not too far from Beckenham Junction station. It’s 13th Century lychgate is said to be the oldest in England.

There is also an Odeon in Beckenham, by the War Memorial roundabout, if you fancy a film in the afternoon. And the building is Grade II listed.

Beckenham has also had some famous residents in the past, including David Bowie, Bob Monkhouse & Julie Andrews. Former Southwark boy David Haye, the well-known boxer, lives in the area & many a Hamlet fans childhood sweetheart, Floella Benjamin, of Play School fame, grew up in Beckenham, originally from Trinidad. In 2010 she became a life peer & sits in House of Lords as Baronnes Benjamin, of Kent.