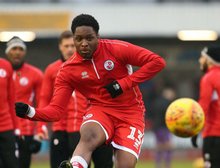 Ricky German has signed on loan from Crawley Town until January. The 22-year-old Grenadian international joins us from the League Two side to boost our attacking options.

German started his career at Chesterfield, where he also spent time on loan at Alfreton Town, Sheffield FC and Matlock Town, before moving to Southern League Premier South side Hendon. During the 2018/19 season, German excelled in North London, scoring 21 games in 28 games for the Dons.

Signing for Crawley Town in January 2019, he made his debut against Port Vale, coming on to replace former Dulwich attacker Panutche Camará. During his time at Crawley, he has also had a loan spell at Hemel Hempstead from July 2019 to January 2020.

German was recently called up to the Grenada National Team, and featured in the 2021 Gold Cup alongside new Dulwich teammate Tyrone Sterling.

Meanwhile, Ronnie Vint rejoins the club on loan from Dartford. The centre back also spent time on loan with us during the 2020/21 season, putting in some excellent defensive displays. We would like to welcome Ronnie back to the club.

There have also been two outgoing loan moves. Deon Moore has signed for Lewes on an initial one month loan and Jamie Splatt has joined up with VCD Athletic. We would like to wish both players good luck during their spells away from the club.