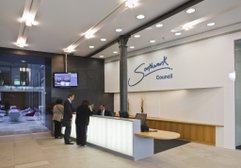 Sometimes it can be hard working for a local council, as all the cuts imposed by central government leave the front-line staff to take the flak

But here at Dulwich Hamlet, what with the public sector wage restraints that amount to real-life cuts in pay for staff, we know that it's not always possible to afford football, when supporting your local team should be a way of life not a luxury.

And one thing we believe we do offer at Champion Hill is affordable football...certainly in relation to the professional game, as well as our wide-ranging swathe of concessions.

Last season we held a successful Trade Union Day, whereby we offered anyone who showed their trade union membership card a special concession rate for the game that afternoon.

And now we are tweaking that theme to offer all local South London council workers from not just the London Borough of Southwark, but also the neighbouring & nearby boroughs of Lambeth, Lewisham, Greenwich & Wandsworth the chance to see South London's best supported, most exciting & certainly the most inclusive & welcoming football club in our South London catchment area, FOOTBALL FOR A FIVER rather than the usual £11 when we take on Leatherhead in a Bostik League Premier Division match on Saturday 23rd September, kicking off at 3.00pm. All any local council employee has to do on the day is show their work identification badge at the turnstile, to gain the one-off concessionary admission.

"In an ideal world we'd be able to offer a special deal to lots more people, but council workers in particular, are hidden heroes in our local society, be they refuse workers who empty our bins, social workers & care staff who look after our elderly, teachers & teaching assistants who educate our young, right through to housing workers & library staff; to name just a few. We already allow all kids under thirteen free admission, so hopefully we can show them there is a cheap local alternative to expensive days out at the likes of Crystal Palace & Millwall, where they certainly won't be able to afford to take the family week in, week out."

"Lots of our fans, myself included are proud to be council employees. And we're also proud to be Dulwich Hamlet supporters. It's an honour to see my trade union UNISON on the back of our shirts, and this is a small way we as a Club, can say thank you to them. Hopefully it will encourage some of our regulars to bring their mates from work along, if their bosses are based in the town halls."