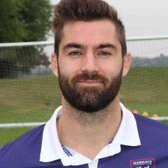 We are pleased to announce that striker Ryan Moss has today signed for Dulwich Hamlet, joining us from National League South side Margate.

Moss is a prolific scorer at this level, scoring 25 goals for Kingstonian in 2013/14 before joining Margate and netting 19 times in their 2014/15 promotion winning season, including the only goal in the play-off final against Hendon. Everyone at the club would like to give Ryan a warm welcome and we look forward to seeing him in action.

The signing comes as Calum Willock leaves the club. Willock joined in August and he was entirely funded by the 12th Man Scheme during his time at the club. He scored 7 goals in 19 appearances for Hamlet, including 4 goals in his first 4 games for the club . Gavin Rose said "Calum made a fantastic contribution to our club in the time he was with us and was also a great person to have in the dressing room. I'd like to wish him every success and I'm sure he has a long term future in football well beyond his playing days." Calum revealed there has been interest from a number of other Ryman League teams and he is currently considering his options.

The 12th Man Scheme has been running for over three years and has raised in excess of £25,000, every penny of which has been spent on additional signings for the club. As well as Willock and Moss, the scheme was responsible for the loan signing of Rhys Murrell-Williamson, who this week committed to Hamlet for the remainder of the season.

You can contribute to the scheme by donating a regular amount directly from your bank account (see below for standing order form), or by putting cash into the '12th Man Bucket' which you will find just inside the turnstile at every home game. There will also be a Christmas Raffle held at the game against Needham Market on 5th December, with all proceeds going to the scheme. If you are able to donate a prize for the raffle, please contact dhfc12@hotmail.com with details.