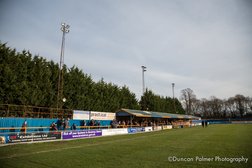 Following Tuesday night’s disappointing 1-0 defeat to a strong Maidstone side, Dulwich travel to Essex to face Braintree Town on Saturday at 3:00pm.

Dulwich were drawn against Braintree in our FA Trophy run of 2017. A 0-0 in the Third Round at Cressing Road, was followed by a 5-2 win in the replay back at Champion Hill. Goals from Ashley Carew, Gavin Tomlin, Sanchez Ming and Jacob Erskine helped put Dulwich through.

We are back home at Champion Hill against Hungerford on Saturday September 14th at 3:00pm. Tickets are available to buy here.