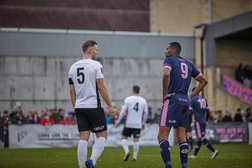 After Tuesday night’s disappointing 3-1 defeat to a strong Havant side, Dulwich travel to Kent to face Dartford on Saturday at 3:00pm.

With Dartford riding high in 7th, this game is sure to be another tough test for Dulwich as we look to reset our recent spell of good form.

We caught up with Danny Mills, who played for Dartford on loan in 2018, to speak about the Havant performance and preview tomorrow's game.

"Following on from Tuesday night's game, I think we came away from it disappointed having had the lead with about 15 minutes to go," Mills said. "I think on the balance of it, Havant obviously did deserve to win the game but from our point of view, if you are 1-0 up with 15 minutes to go, you want to try and do everything in your power to try and see out the game. Even at 1-1, we should've done a lot better. It was probably a bit of a slow game from us, we didn't start particularly well but I thought after we'd scored the goal, we grew into the game a lot better and our performance was better."

"It was great for me to come back into the side, I'd been out for the last three or four games and I came back in. I thought felt nice and refreshed, and ready to go. It was obviously nice to come in and get the goal."

Turning his attention to Saturday, he said, "We've got another huge game now at Dartford - a club I went on loan to a year or so ago. It's a very good club, good people there. I like to call that club a proper club in our division, they've got a great stadium and the infrastructure is all there to get promoted to be honest."

"They're managed by one of my former managers, Steve King. Since he's gone in, he's done a great job. When he went in there, they were obviously flirting with relegation and all of a sudden they find themselves Play-off contenders now and he's built a very strong side of players that I've played with in the past. Darren McQueen, Tom Bonner, Josh Hill, Billy Crook - they've got a very good side and it's going to be very, very tough game for us."

However, Mills was confident that Dulwich can get something from the game. "We have to go there and be resilient. We're going to have to be prepared to soak up pressure. They're the home team and they're a team in form, so they'll be chomping at the bit and they've got a lot to play for in terms of chasing those Play-off places.

"We need to go there and put in a performance like we did against Weymouth away, work hard and we know that we can score goals in our side. We're going there full of confidence, we're not in bad run ourselves. We're in good form and bar Tuesday night we were unbeaten in the last few games."