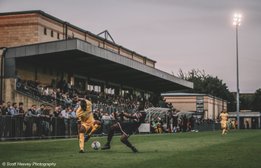 Unfortunately outside pressures have forced Dulwich Hamlet to make increases in some of our prices next season.

Success brings with it the phenomenal growth in support that Champion Hill has witnessed in recent times, but one of the prices the Club must pay is that it is now subject to the requirements of HMRC to pay VAT.

Over recent seasons the Club, in conjunction with the owners, have worked hard to absorb these costs without passing them on to you, our loyal supporters. However, as the growth in support has continued and costs have risen this has become increasingly difficult to achieve.

In considering next season’s pricing structure Dulwich Hamlet chair Liam Hickey has worked with the club’s owners, Meadows Partners, to see how any increases can be kept to a minimum, but in the end, the unwelcome decision to increase admission prices for the 2017/2018 season by £1 for both adults and all our concessions has had to be made.

There is good news as children under 13 will continue to be admitted for FREE. Also should Dulwich Hamlet be promoted to the National League South, then adult prices will rise to £12, which is the standard charge at that level of football. However, all other prices will remain unaffected in those circumstances. As such the match day pricing structure will be as follows:

Regrettably this also means that Season Ticket prices will have to rise whilst payments online via the Dulwich Hamlet website will be subject to an admin charge (£8 Adults & £3 Concessions during the Early Bird period up to 19th May. Teenagers pay no admin charge).The club is still investigating ways in which these charges could be eliminated. Season Ticket pricing during the Early Bird period is as follows:

We believe that buying a season ticket during the Early Bird period still represents excellent value saving an adult fan as much as £88 should they purchase before 19th May. The option to pay by cheque over three monthly instalments remains. Additionally Season Ticket holders will be able to purchase reduced price tickets (£5 Adults; £4 Concessions) for ALL home pre-season friendlies.

An application form is available for download below. Alternatively, you can pick up a copy at any one of our remaining home or from the ground during opening hours.