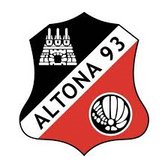 The special 125th anniversary trip to Germany, when we will take on our good friends from Altona 93, has had a date set.

Dulwich Hamlet Committee member Mishi Morath was recently over there where he was extremely lucky and proud to see Altona 93 clinch promotion to the fourth level of German football, when they were promoted via their play-off system to the Regionaliga Nord from the Hamburg Oberliga.

Whilst visiting he had a meeting with Altona fans & officials to confirm the dates, and offer provisional details of our special trip, which will be next July, in just over a year.

A game against a lower level side is in the process of being arranged for the evening of Friday 13th July. Once the opposition have been confirmed we shall let you know.

Saturday 14th July will be a 'free day', with our full First Team squad having a complete training session, as this is no holiday for them, but a full pre-season training camp, where they will be pushed to the limit by Gavin Rose, and his team of coaches.

On the Saturday night a full party will be organised for the fans of both sides in the Altona 93 clubhouse at their stadium..with the excellent news that their S-bahn (local rail services) run all over the city all night at weekends, so it's going to be a late one!

The climax & highlight of the trip will be the big celebratory match between our hosts Altona 93 and ourselves to commemorate the 125th anniversary of both clubs, which will kick off at:

at their historic Adolf-Jager-Kampfbahn stadium...the very place where Edgar Kail led The Hamlet to victory on the Easter tour of 1925!