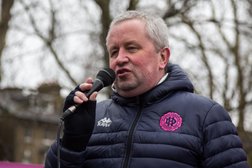 With home games coming up, here's what Football Committee Chair LIAM HICKEY had to say in the last home programme

Good evening everybody and welcome to the KNK Stadium for this afternoon’s game against our good friends from Worthing. By a quirk of fate, this means that neither of us will have played our home game on home ground this season.

I would also like to especially welcome everybody from Worthing and say how pleased I am that they have pulled away from the foot of the table. My other special thanks go to Jackie & Tim at Tooting & Mitcham United for their fantastic support on Tuesday evening.
It goes without saying that I am delighted to see the continued support from our own fans during our exile from our community. There is no doubt that this has come about as a deliberate ploy by Meadow Residential to kill off the club and to try to block our ability to speak out. I do not believe there is any way back for our relationship with them.
Whilst I am convinced many will be busy cheering on Worthing, I would also like to welcome any Tooting & Mitcham fans who have taken up our free ticket offer for this afternoon’s game. WE come in peace!

On Tuesday night, we lost one battle but there was good progress in winning the war.
On the pitch, the Metropolitan Police turned up intent on playing a defensive strategy, and it seemed to me that they were playing for penalties a long way from the end. It worked for them so I wish them good luck in the final.

Off the pitch, we received good news from Southwark Council, who voted overwhelmingly to seek to purchase Champion Hill from the current owners. Whilst there is still a long way to go, we could not have had more backing from our local authority and, whatever happens, I will always be grateful for their demonstration that they see our club as an important part of community cohesion in the borough.

It also seems somewhat surreal to see the level of support that we are receiving from across all spectrums of society. Who would have thought Peers in the House of Lords would be donning a Pink & Blue scarf and that there would be a debate in Parliament?
Our local councillors and MPs have done us proud. However, none of this would be happening without the amazing work of Tom Cullen and Duncan Chapman. They have both been instrumental in making this campaign reach across the whole country and beyond.

Whilst we are fighting for our own lives, we want to ensure that when we win that it has a lasting positive impact on all those other clubs who face, or could face, the same situation. It is my opinion that all sports stadia should be protected for community use and unavailable for developers to obtain.

Turning to the current situation, I note that a number of questions have been asked of our Supporters Trust during their consultation period and so think I should try to cover some of these off from the club angle as well.

In terms of finding new investors, then this is difficult whilst Meadow continue to hold an option over 98%. We have had meetings with serious investors who have the interests of this football club as their primary aim, but if we cannot give them anything for their money then there is nothing anybody can do. Therefore, I call again on Meadow to relinquish control over a club you have no interest in, other than to destroy it.

We also have brought people other than Rio Ferdinand to the table who have the finance available to acquire the stadium, but again they do not seem to want to engage with them.
In terms of the ownership of Dulwich Hamlet Football Club Limited, myself and Tom Cullen have recently become Directors. Now many of you may think we are mad, but this was to ensure that we could not be accused of acting as “Shadow Directors”. In essence, it was done to ensure that we were acting within the law.

However, we do not own the club as Nick McCormack remains the majority shareholder and it is his shares that Meadow control.

The day to day running of the company is being done by myself and Tom merely to ensure that we can be “in the know” as Nick is not directly involved and wants no involvement. In essence, somebody had to step forward when Meadow handed back control so we drew the short straw.

All money coming in is not accessible to Meadow but the outgoings are a legacy of their involvement and we cannot change this until the end of the season without breaching contracts.

In effect, this club is, and has been for a long time, fan run but not fan owned,
For those who may still not be clear on the current situation then I repeat what I said in Tuesday’s column about recent events below:

In brief, the reasons given for our licence being terminated were our lack of Public Liability insurance, which is in fact provided through the Bostik League, our inability to meet the costs of Meadow’s legal action against Southwark (taken in our name), which Southwark are not asking us to pay, the payment of back rent that Meadow conveniently “forgot” to take when they handled our finances on behalf of our majority shareholder. Finally, we apparently didn’t pay our rent for the last home game but have clear evidence to show it was not due. All in all, it’s a load of trumped up nonsense to achieve their aims.

We always knew that they wanted us out at the end of the season at the latest.

Whilst the above is shocking enough, to receive papers saying that we could no longer use our name was just ridiculous and shows that Meadow Residential have lost all sense of reality in their attempts to destroy our club. This was a flagrant attempt to silence the club and its supporters that has made them look ridiculous. None of us buy the excuse they came out with that this was done to protect us and to be handed over to the club. Despite what they think, we weren’t all born yesterday.

On this note, they were served with papers asking for the immediate return of our rights to use our name, together with the other forbidden phrases of “The Hamlet” and “DHFC”.

We have also asked for further adjustments to other entities that use the phrase Dulwich Hamlet and which they own. I believe they have now agreed that they have no rights to our name an d we are discussing what further actions are available to us.

On the field, we continue to challenge but it will take a monumental effort for us to continue to do so with our gates naturally going to be reduced by our absence from the community that we represent and also, I think, serve very well. We can do this, but we really need our 12th Man buckets to be filled up.

Needless to say, we continue to fight for our club at every turn and if you have skills and expertise, or just enthusiasm, that can help us then please step forward. All offers will be accepted.

I am also happy to continue to answer any questions you may have via email or at the match.

Thank you for your support. It is you that will ensure our club has a bright future.