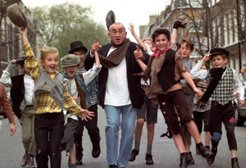 A tough test for the Hamlet as the Urchins, unbeaten since the opening day of the season, make their way to Champion Hill.

Currently lying in sixth spot AFC Hornchurch are one of those clubs who will always snaffling at the bit when the hunt for the title heats up, a club that will arose like a phoenix from the ashes after the financial life support of Hornchurch FC was switched off at the height of their success mere days after an infamous afternoon in Hamlet history. Nevertheless, we shall learn more of that later.

Having watched the Urchins attain Isthmian League status in the mid 70’s, fans found themselves back in the boondocks of Division 3 after the reorganisation of non-league football in the early 90s. Yet they battled back and 2002 clinched the runners-up spot in Division 3 to claim a place in the newly formed Division One North.

In the wake of that promotion the club found itself restructured. The old members club was disbanded and a new Limited Company was formed with a major funds injection that provided for a radical overhaul of the ground and its facilities as well as substantial investment in the creation of a team capable of attaining the loftiest status. Within a year a rundown, derelict athletics stadium had been transformed into a 3,500 capacity arena with 1,000 seats ground and all mod cons including a spanking new restaurant, swanky bar, state of the art changing rooms and gymnasium. The fans were not forgotten either, with ablutions, the envy of the club’s rivals, installed and plenty of refreshment points to sate the hunger pangs.

With the wheels well-oiled the Urchins were always in the running, clinching promotion to the Premier Division long before the season end and only pipped to the title by Northwood by a single point as the last day’s results refused to go in their favour.

From the shadows the clubs backers provided the funds for further investment, five new arrivals meaning the Urchins could “boast” a dozen fulltime professional players. It came as no surprise when promotion to Conference South was achieved at the season’s end. Along the way memorable milestones in the clubs history were set as Hornchurch reached the Second Round proper of the FA Cup having disposed of Darlington a round earlier. With the ground bursting at the seams and the TV cameras in attendance a Gary Jones effort after 26 minutes broke Hornchurch hearts to ensure Tranmere’s progression. However the result was not without controversy the goal coming moments Vinnie John had had a headed goal chalked off for an apparent push.

The following season saw the appointment of seasoned gaffer Garry Hill and the squad strengthened still further, including the arrival of former Spurs legend Darren Caskey. With rumours circulating of a six figure pay-packet for the manager and squad players taking home as much as £40k a year there must have been some who feared the worst. And so it would prove but not before an historic afternoon at Bridge Avenue when Dulwich arrived for a FA 3rd Qualifying Round tie. Even though this was a strong Dulwich side, boasting the likes of Peter Garland in its ranks, most Hamlet fans had more in hope than expectation. Five minutes in and the worst fears were realised as Wayne Purser put the Urchins ahead. Purser bagged a second on 18 minutes to make it two before Simon Weatherstone’s 20-yard effort added a third. A brief rally from the Hamlet was quickly snuffed when Jamie Stuart headed in the fourth. Number 5 came 6 minutes into the second half as Stuart scored again before a Dulwich player finally found the net. Unfortunately for John Wilfort it was his own. Just before the hour Danny Shipp made it 7-0, Simon Wormull took it to eight with ten minutes left leaving Purser to complete his hat trick two minutes from the death. The result equalled Dulwich’s heaviest margin of defeat in all competitions.

A few days later the shadowy financial octopus that had underwritten the Urchins began to unravel with the collapse of the double-glazing company, Coldseal. Having built up Hornchurch to the level that its money was it lifeblood, Coldseal Windows went kaput. Almost immediately a player exodus started with Hill replaced by Tony Choules in the hot seat. Surrendering to Thurrock a title that had seemed theirs by right, and enriching a few canny punters along the way, the Urchins managed to cling on to life until the end of the season on a budget reduced to little more than a peppercorn. However, with the last rites read in the summer the club found themselves back where they started as they added the now obligatory AFC to their name to reform in the Essex Senior League.

The whole sorry affair left many curious of motives behind those backing Hornchurch. Others suffered too with sponsorship money from the Carthium Cup and The Bryco Cup (the respective league cups of the Conference and the Isthmian League) as well a number of clubs further down the pyramid. Surely it must serve as a salutatory lesson to clubs to pay heed to those who promise much with money even if those same clubs are blinded by the success that same money brings.

Under former Urchins Youth Team Manager John Lawrence the new team bounced straight back clinching the ESL almost before the Christmas decorations were down before going on to lift the Gordon Brasted Cup and the League Cup. His job down Lawrence stepped aside for Colin McBride to lead a further strengthened team for another memorable as they stormed to Ryman North League title with 103 points, 21 points clear of second placed Harlow Town. In the process the team lost only three league matches and finished the season by setting a new club record of 35 games undefeated. In addition to the League Championship additional silverware was earned when the team won the Essex Senior Cup for the first time in the club’s history.

Though they reached the playoffs in their first season back in the Premier Division, further league success eluded the Urchins until 2012 when they finished in second spot, three points behind Champions Billericay, before dispatching first Bury Town then Lowestoft Town on their way to playoff triumph. However their return to the Conference South proved but a brief sojourn as they finished third from bottom to slip back to the Isthmian League.

After an opening day reverse at home to Lewes, who narrowly avoided the trapdoor themselves last season, the Urchins have proved themselves a tough side to beat. Starting with an injury time winner at Margate courtesy of Ade Yusuff the Urchins ran riot in Bromley with a 6-1 crushing of Cray Wanderers. An entertaining if ultimately goalless draw at home to Bury Town followed before the team showed their battling spirit, coming from behind to beat Lowestoft at Bridge Avenue as a whacky opening goal in atrocious weather conditions cancelled out a halftime lead for the Trawlerboys before George Purcell’s penalty 2 minutes from time ensured victory. More heroics followed on the Bank Holiday trip to Billericay as the players dug deep to to rescue a two-goal deficit with Purcell again making sweet music with a vital second half double.

Before the game why not enjoy a drink or snack in our cosy clubhouse with live sport on the big screens, conveniently situated just a short walk from the turnstiles? Moreover, after the game don’t forget Happy Hour in the bar, time to drown your sorrows, toast success or just chat and chill.

Correct change would be appreciated in order to speed admission. Many thanks!