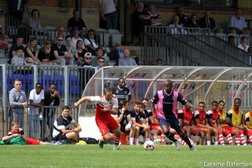 Update from The Hadley Group

As things continue to move forward on and off the pitch, Hadley would like to update fans with a progress report.

Despite the unexpected extension of the season because of the well documented problems with the end of season playoffs, last season still feels like it was ages ago… and now we’re already into the fourth league match of the season.

On the pitch, things are already looking promising. I know that Gavin has been working hard to ensure that his squad can be really competitive this season, and has squeezed everything possible out of the budget. By now you will probably be aware that we have agreed a two year contract with him, which gives him some of the certainty that he needs, and the club benefits from. The Twelfth Man scheme run by supporters has helped him a lot, too - so a big thanks to everyone involved in that.

Off the pitch it’s been a very busy time too, and we thought it a good idea to bring you up to speed with some of these developments. I would also like to explain a bit more to all of you about some of the specifics of the project that we’re involved in, how long they might take, who is involved, why, and to what ends.

In 2013 we bought Champion Hill. In taking control of the ground, we then set about creating some certainty for the club itself. We explained the initial changes that we’d made in our first 12 months, with the consent of the club’s owners: paying off debts, ensuring that facilities are in better shape, providing a new licence for the club to play, as well as some certainty for tenants Fisher FC whilst they await their new stadium in Rotherhithe. There’s more on the official site here: http://www.pitchero.com/clubs/dulwichhamlet/news/open-letter-from-the-hadley-group-1213307.html

All of this has meant that the club itself is currently stable. It is generating more certain sources of income, although the stadium still creates a number of losses that we are covering. Twenty years without repair has accelerated issues which would have been manageable if they’d been dealt with as they appeared – take for instance, a constantly flushing toilet, which generated more than 35k worth of water bills! In the long-term we want to remove this problem completely and leave a financially robust and sustainable club.

We’ve tried our best to be open with everyone about how we want to go about doing things. It’s on the record that we own Champion Hill because we want to redevelop it for housing, but a key part of that plan is securing a genuine and long-lasting legacy in the shape of a new ground, community and leisure facilities, and with the club itself in a secure, long-term model of ownership by the supporters and community.

We have had a lot of discussions with stakeholders (Southwark Borough Council, residents, fans, and various interested parties) about our plans. In terms of formal consultation, in late November 2014 we held two events to seek the views of supporters and the local community. We have since incorporated these views and have revised our plans accordingly; we’ll also be carrying out further consultation later this year, so watch this space.

The two parts we want to talk to you about in more detail, developing the site and the future ownership of the club, go hand in hand. Here’s more about what we’re doing on both counts:

The stadium, community & leisure facilities
So we can progress this part of the project we have carried out consultation days (see above), met with Dulwich Hamlet Supporters Trust (DHST) both formally & informally, and met their own architectural advisers, AFL, who have expertise in stadia that the project can benefit from. We’ve taken advice from the committee and from fans on a formal and informal basis, and will continue to do so as we approach submission. It is important that we provide a stadium that will work not just now but for many years into the future, and we also want it to be suitable for football at least two flights above the current level we play at – which is something which can’t take place at our existing stadium.

We’ve also met, along with Gavin, a number of clubs and chairmen from similar playing levels as DHFC to discuss facilities, including some of the more specific elements such as the pitch itself. The aim, as you probably know by now, is to have an artificial surface like the ones at Maidstone United, Sutton United, and many others now springing up around the country. It means less postponements, more community use – and will provide a great revenue stream to keep this football club operating for years to come.

We have also been progressing the work to secure an operator for the stadium and facilities. Clubs who also have extensive leisure and community facilities need the right people to run them, and the aim is to provide the club with a partner who will provide a good quality service to all users, ensuring that the facilities are well maintained and generate a good income. We were looking for the right people to operate what in the trade are called ‘multi-sports facilities’ and we’ve identified GLL, who you might know under their trading name of ‘Better’. They operate these sorts of facilities across the country for local councils and others. The added advantage with GLL is that in common with how we hope the club will be owned, they too are a type of cooperative very similar to the how supporters’ trusts are set up.

We are also consulting with the various stakeholders on the sort of other facilities that might be useful, and on what type of access that local organisations such as schools might need. This is vital if the aim of ensuring a real community club from top-to-bottom is to be realised.

Local politics matters a great deal, and we’ve met with both ward councillors, so they can give us their views on the project. We’ve also met with other interested councillors. It’s vital they know just how important the club is to local people, and how this project will secure the club & enhanced facilities for the local community.

We’ve also had meetings with council planning officers. With a project like this it’s important for us to be in regular conversation with the people at the council who have the know-how, and can help anticipate problems and solutions in advance. Submitting a planning application is not something you do ‘blind’. It’s a process that takes time, and plans often will be tweaked and changed in all sorts of ways.

Fan ownership
This is the part of the project that has probably created the most interest outside of the club itself. Football clubs, as we don’t need to tell anyone, are different to most other businesses. Even supporting a club like Liverpool is not like buying your weekly shop from Sainsbury’s – we recognise that the relationship is different, and you don’t really end up changing your club like you might switch supermarkets.

We also understand that property developers have not had a good reputation when it comes to football clubs, and a lot of trust is being built between everyone. That goes for all supporters: it’s your club, and we want you to be able to feel part of what’s happening here.

Over recent years, a special and very genuine atmosphere has developed at Dulwich, and we want to encourage this because we think it bodes well for the future. The credit goes to the football committee, supporters’ trust, fans and volunteers out there who have put the work in, and telling the world about what’s going on here. We hope we’ve begun to remove some of the cynicism felt towards us. We regularly talk with the supporters’ trust on all the issues around ownership, and have met just this week to try to finalise a ‘memorandum of understanding’ so that we can go forward with clarity and a clear framework of who is responsible for what.

On the legal and technical side, we’re new to this area and so we’ve sought out as much expertise on this as we can. One of the first things we did once we had stabilised the finances was to meet with the experts on fan ownership, Supporters Direct (SD). As members of SD, the supporters’ trust benefits from their knowledge and experience, and we felt that it could help us too. We’ve remained in contact with James Mathie, their Club Development Manager, to ensure we understand the various legal and technical process that need to be followed to make fan ownership a reality.

We have also engaged Kevin Rye, the former Head of Policy and PR at Supporters Direct and a former colleague of James, to advise us on some of the issues involved. We met and spoke with Kevin alongside James several times when he was working for SD, and when he left the organisation in April we asked if he would work with us on the project. It’s been useful to have someone who understands the process at play, the concerns that supporters have, and can see what potential this project has.

We realise that this is probably a lot of information to take in. Not only is this being published in the programme, but also on the DHFC website. We’ve also created a Q&A to address as many of the questions and concerns that fans and the local community might have. This can all be found by going to, as you all know, http://www.pitchero.com/clubs/dulwichhamlet

I’ll be writing more regularly as we approach submission too, so please do expect more regular updates from myself and the team.

Matt Rimmer, on behalf of the Hadley Property Group.