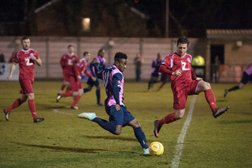 Its nearly two weeks since we had a home game and that doesn’t bring back happy memories as we went down 1-2 to Leiston, our first defeat in 12 league games. To make matters worse, it was a game we should have won. We enjoyed the lion’s share of the possession and created plenty of chances, but the ball didn’t run kindly for us in the opposition penalty area and, to their credit, the Suffolk side also defended really well.

Jordan Hibbert deputised for the injured Michael Abnett, otherwise we unchanged. Leiston caught us on the counterattack and opened the scoring within ten minutes of the start. Gareth Heath swung a fine ball out to the left where Tom Winter had time and space to cross for Danny Block to fire past Phil Wilson from 15 yards. We probed and pressed for the remainder of the half and eventually equalised six minutes before the interval. Following a short corner on the left, ashley Carew played the ball inside and Xavier Vidal hot one of his ‘specials’ from 20 yards which, with the aid of a slight deflection, flew into the bottom corner to the ‘keeper’s left.

We opened the second half on the offensive and a fine solo run and cross from Luke Wanadio almost led to a second goal, but Harry Ottaway was crowded out by the ‘keeper and two defenders on the edge of the six yard box. The Suffolk side then forced a rare corner in the 56th minute and an unmarked Craig Parker met Danny Cunningham's cross with a firm header which went in off the underside of the crossbar to put them back in front. The rest of the game was one way traffic towards the Leiston goal. Xavier Vidal was only inches wide from the edge of the box after a Harry Ottaway shot was charged down, and a minute later a delightful pass from Ashley Carew put Xavier Vidal free but his first shot was blocked by keeper Danny Gay and he blazed the rebound high over the crossbar. Hard though we pressed we just could not find a second equaliser. Nyren Clunis stung Gay’s palms with a fierce drive, Xavier Vidal narrowly missed the target on a couple of further occasions and Luke Wanadio shot across the face of goal. The ball hardly left the Leiston penalty area during five minutes of stoppage time, but Kevin James just failed to connect when Harry Ottaway nodded down a fine cross from Albert Jarrett, and in the closing second Ethan Pinnock went close with a header from Frazer Shaw’s corner.