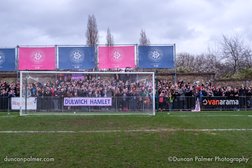 Dulwich rescued a point with an equaliser in the last minute of five added on.

A deflected header from Magnus Okuonghae gave The Hamlet an equaliser in the fifth and final minute of stoppage time. However, with ten minutes remaining and Dulwich two goals behind, there were very few in the crowd who would have given the team a chance.

Dulwich opened brightly with Nyren Clunis seeing his cross shot pushed out by keeper Alan Julian but the visitors soon looked the more likely to take the lead. Jamar Loza turned Nyren Clunis inside out before his effort was deflected for a corner. Next to go close was Danny Waldren, who received the ball from a clearance and fizzed an effort from 20 yards just wide.

Dipo Akinyemi forced a low save from Julian, but Billericay then forced a number of corners which lead to them taking the lead from a Joe Kizzi header at the far post.

Dulwich were struggling to get a foothold in the game and soon presented Billericay with a second goal in the 28th minute. Michael Chambers put his attempted clearance high into the the air. Anthony Cook tried to head it back to Preston Edwards but instead put it straight to Moses Emmanuel who fired home.

Dipo Akinyemi had a chance to reduce the arrears after he latched on to a flick from Dan Thompson, but he shot wide. With half time approaching, Aryan Tajbakhsh was brought down on the edge of the penalty area. Nathan Green's free kick was deflected into the path of Dan Thompson whose effort was pushed out by Julian.

The same player had another chance before the break but his weak header was saved low to his right by Julian.

There was little sign of any change in the early stages of the half and it was the visitors who went closest through Loza, with an effort from the edge of the area. However, the balance started to shift and Dan Thompson fired an effort just wide after driving forward at goal.

With Billericay's substitutions looking to see out the game, instead the initiative shifted to the home side. A ball forward from Magnus Okuonghae in the 80th minute was pulled down by Nyren Clunis who was tripped on the edge of the area by Efete, with the referee pointing to the spot. Dipo Akinyemi stepped up and converted confidently.

Dan Thompson then missed a good chance to level matters with five minutes remaining but instead his effort was deflected for a corner. However, with five minutes of stoppage time to be played, Dulwich put increasing pressure on the visitors goal. A series of corners and crosses rained into the penalty area. In the final of the 5 minutes, Dominic Vose delivered a cross that saw Magnus Okuonghae's header deflected into the corner of the goal past a helpless Julian.