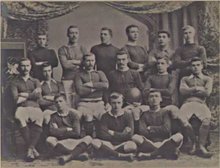 In 1986, William Keegan M.A., a member of the Club for 35 years, serving on the Selection and Management Committee becoming Vice-President in 1968 and President in 1970, researched and compiled a book titled "Dunfermline Rugby Football Club - A Brief History" covering the years from 1896 to 1986. The Club is indebted to him for researching and preserving such a substantial part of the history of the Club.

Copies of the book, which also contains Reminiscences contributed by several noteworthy individuals associated with the Club at that time, are still available from the Club Secretary at a cost of £3.50.
Subsequent to publication of the book, a photograph of Dunfermline R.F.C. taken in 1893 surfaced and further research revealed reference to the Club playing matches that year.
An article in the Dunfermline Press published on 18th March 1893, quoted:-
"It may not be in the knowledge of many that the older game of rugby has lately been revived in Dunfermline, mainly through the instrumentality of some old Merchiston boys in the town. A Club has been organised and already the membership numbers between 40 and 50. Today fifteen of the Club journey to Dollar to play their first match against the Dollar Academy fifteen. Though much cannot be expected of the team seeing they have only had a few practices, still we may be sure that they will do their best today for the honour of the Auld Grey Toun".
The next season started in October 1893 and the Club's first match was again against Dollar, who won 3-0. It was a "very fast and interesting game" according to the Press of 28th October 1893. "Page was easily the best of the forwards although they all played a good game". Behind the maul, Cameron's long kicks and Beveridge's tackling were of immense service to their side".
In 1896, the Fife Free Press, the Kirkcaldy equivalent of the Dunfermline Press, mentioned a game between Dunfermline and Kirkcaldy. Between then and 1905 there are indications that Rugby Football was played in the town with no evidence of unbroken playing. As no Rugby was played in local schools, the Club relied for players on local boys who attended Edinburgh schools with the addition of some recruits previously thirled to the Association games.
Fixtures were arranged against Edinburgh Junior Clubs with the addition of games against some Midland Clubs such as Kirkcaldy, Cupar and Perth. Games were played on the Race Park adjacent to the present McKane Park. Jerseys had green and white stripes.