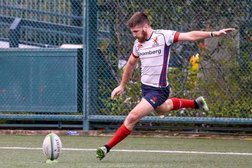 Massive congratulations to Gregor McNeish who is shortly to earn his first International cap for Hong Kong.

Gregor has just been selected to the Hong Kong International squad and will play in their Autumn Tour In November in two full Internationals against Belgium on 16th Nov in Brussels and then Spain on 23rd Nov in Madrid. Hong Kong are currently ranked 24 in the world rankings with Belgium 27 and Spain 16

Gregor McNeish, Stand Off, played at Dunfermline from P3 until he was 21 years old, playing 3 seasson for the 1st XV before moving onto Heriots RFC for 2 seasons (when they won both league and cup). Gregor was selected for the Scotland Club XV in 2014 and played against the English Counties XV.
After qualifying from university the travel bug then hit him and he moved out to Taradale RFC in Hawkes Bay in New Zealand for 6 months before heading to Hong Kong for the start of season 2016-17.

The club is delighted for Gregor and wishes him continued success.