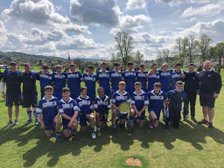 A match played atrocious conditions - cold, gale force winds and torrential rain - both teams did superbly well to play some decent rugby. Dunfermline played the better rugby in the early stages, passing the ball to the wide channels and running in two early tries. However GHK played the conditions well and attacked down the narrow channels around the fringes of the breakdown, finishing the half in the lead.
Dunfermline continued to play with some ambition in the second half, and with the wind behind them they pinned GHK back in their half for long periods, finally rewarded with a well worked try.
GHK continued with their direct approach and gradually got back on top, scoring a couple of late tries to secure the win.
Well done to both teams, GHK's strong ball carrying suiting the conditions better than Dunfermline's wide game, but all players did well in such awful conditions.
Share via
FacebookTwitter
https://www.pitchero.com/clubs
Recent news