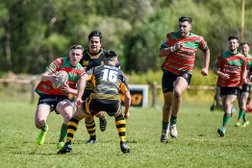 Dunvant score 12 tries to win 74-24 but Kidwelly start with only 14 players, drop to 13 but still earn a well deserved try bonus point.

Two seasons ago Kidwelly were the 1 West Champions but in failing to win the promotion play offs with Trebanos for Championship status they lost a number of players and support staff needing to rebuild quickly. Last season they battled in the relegation zone with Tenby, Penclawdd and Tycroes managing to finish 9th on the last day of the season with Penclawdd and Tycroes being relegated. This season has again been tough for the Black and Ambers hogging the relegation spots with Tenby and they have won only three games , an impressive 8-3 home win over 2nd placed Gowerton an 8-6 win at Llanelli Wanderers and a 23-31 win at Tenby United but were already relegated ahead of arriving at Broadacre.
Kidwelly could only name a bare 15 players for this game and with full back James Owen being injured in a car crash in the morning (hope you are OK), Kidwelly were determined to honour their commitments and started the game with only 14 players and no substitutes but did have a full front row. They soon lost a player to injury and played most of the game with only 13 players. What spirit, what determination we saw from these boys. In spite of a 7 try onslaught from Dunvant in the first half and a further 5 in the second half, Dunvant using all 20 players, Kidwelly battled for the full 80 minutes and in the process scored a well deserved bonus point scoring 4 tries. We wish them well in Division 2 West and hope they can bounce back quickly. Very best of luck boys.
For Dunvant, this was a side of mainly home grown talent which has finished in 2nd place for the 2nd consecutive season but surpassing last years try count and points totals. With a never ending injury list this season we have had to rely heavily on our 2nd team for players and 3 players from last year’s youth team Morgan Bevan, Joe Packer and Jack Phillips who have fitted straight in seamlessly at a much higher level. Well done to the whole squad for your contribution to the success of our 1st XV and we look forward to next season
A huge thank you to all our Sponsors for their contributions during 2018-19 and we look forward to welcome you all and our supporters back to Broadacre for the 2019-20 World Cup season.
Note: Our young Prop Scott Hill broke his shoulder during the game but family are confident he will be fit and raring to go again next season. Best wishes Scott.
Scores:
Dunvant: 74
Tries 12: 14 Matt Richards (T1, T6), 10 Adam Williams-Parry (T2,T3, T7 . T9, ) 13 Richard Lewis (T4), 15 Sam Hawkes (T5, T10) , 9 Glen Williams (T8), 11 Joe Packer (T11), 18 Michael Mizzi (T12)
Conversions 6: 10 Adam Williams-Parry (C2,C3, C4, C5,C6, C7) 9 Glen Williams (C8,)
Kidwelly: 24
Tries: 9 Rhydian Jenkins (T1) 8 Richard Pierce (T2), 10 James Owen (T3, T4)
Conversions: 10 James Owen (C2, C4)
Half-Time: Dunvant 47 Kidwelly 5
Dunvant Rugby Club Singers Man of the Match : 9 Glen Williams
Match Official: Chris Oliver