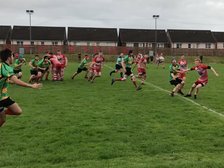 Dunvant Youth made it three wins on the trot as they breezed into the second round of the WRU Bowl with a seven try victory at Gorseinon.

It followed up their 29-0 league win at Gorseinon a fortnight before and a 26-14 District Cup victory at Gowerton.

Gorseinon requested passive scrums from the off but this did not detract from Dunvant’s display as they opened up a 14-0 lead in the first 15 minutes with tries for birthday boy Oscar Muxworthy and captain Iwan ‘Subo’ Buckley.

Outside-half Liam Manning extended the lead with a penalty before a second try for Buckley gave the Youth a 24-0 lead.

Against the wind in the second half the quality of the Youth’s performance did not decrease with further tries for Tom Richards, Lewis Sillitoe and Jamie Parry.

In all it was just the result Rob Murphy’s side wanted before returning to league action at home to Waunarlwydd next weekend.