Charles Young Adamson was a Durham City rugby union international who unusually played for the British Lions but did not play for England, his country. 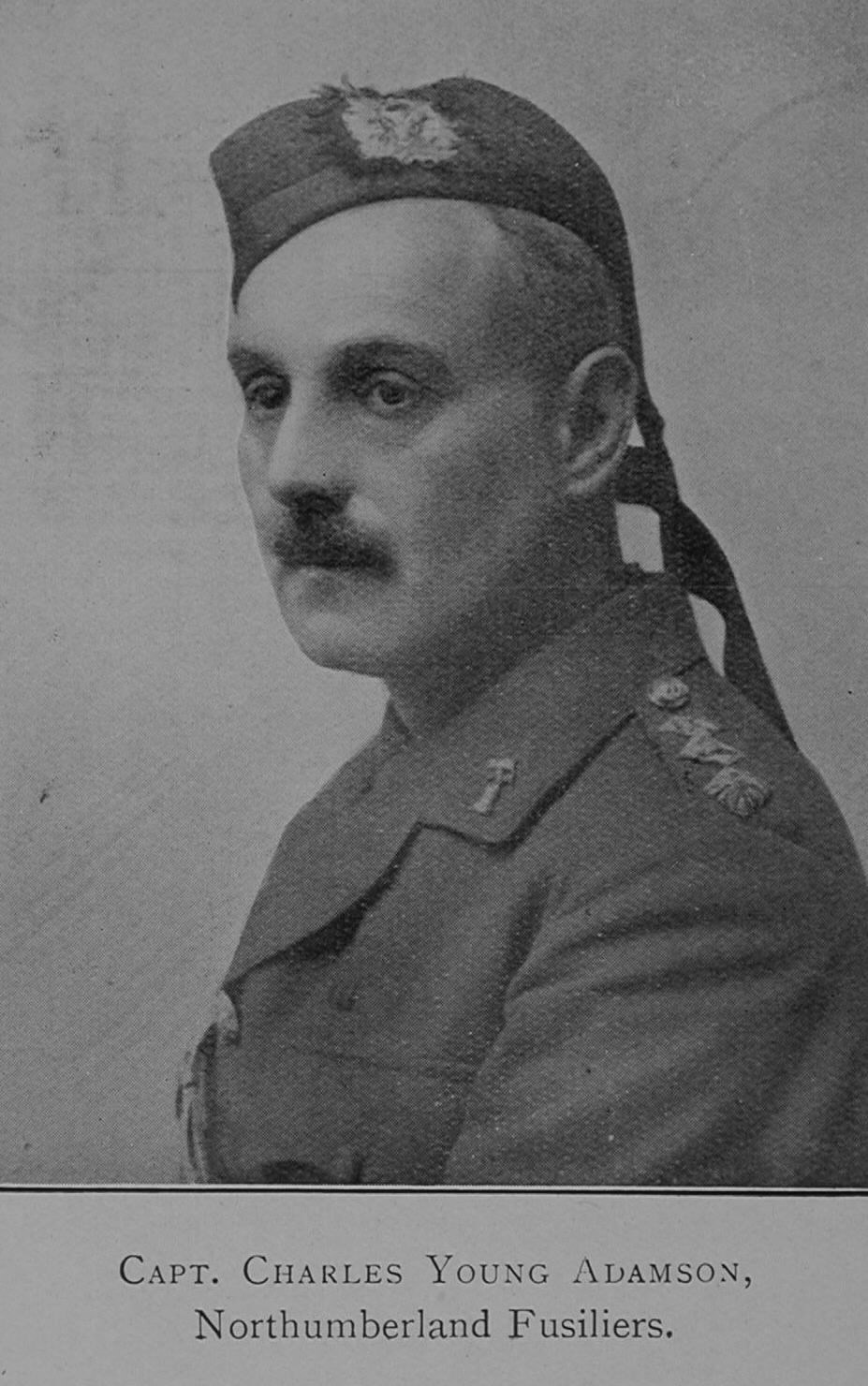 Charles Young Adamson, or Charlie as he was known, was born in Neville's Cross, Durham on 18 April 1875, the second son to John Adamson, a British subject of Little Grant, Wisconsin, USA and Anne Young of Durham; they were married in Durham in 1872.

At the time of the 1881 census John and Annie and their family were living with her parents at Nevilles Cross. John was a corn merchant employing a Clerk and a Boy, and they had 4 children: Robert William born in 1873, Charles Young, Frederick (Fred) born in 1877 and little Annie born in 1880. Young Charlie was recorded as a Scholar and he was educated at Durham School.

By 1891 John and Annie had set up their own home at Nevilles Cross and Charlie had two more siblings; Ethel born in 1883 and Jane Frances (Jeannie) in 1885. They also had 2 servants, a Cook and a Housemaid.

The Adamson family were strongly connected to cricket, with John representing Durham, and Charlie's own sons, Charles Lodge Adamson and John Alfred Adamson playing in the minor counties. Charlie was also brother-in-law to Lewis Vaughan Lodge, who played international football for England. Charlie too was a gentleman cricketer, playing mainly for Durham as well as playing in Durham's first Minor Counties Championship match in 1895. He played at Lord’s against MCC in 1898, playing for Durham until 1914.

Charlie came to note as a rugby player while representing Durham at fly-half and in 1898 he was made a member of invitational touring side The Barbarians. Although never representing the England national team, he was invited to tour with the British Isles team on the first official tour of Australia in 1899. Charlie was the stand-out player of the tour, being selected in all 20 matches. He earned 4 caps and scored 17 points from the Test matches; two tries, four conversions and a penalty goal, making him the Tour's top scorer. In total he scored 8 tries, 35 conversions, 3 dropped goals and 10 penalty goals, 136 point by 1899 IRB rules; 149 by modern (2009) scoring rules. In the First Test, Charlie was placed at centre, alongside Gwyn Nicholls; but after the British team lost the game, team captain Matthew Mullineux dropped himself from the team to bring Charlie into his position at half-back. This move is seen as the turning point in the tour, and the British team won the final three Tests, with Charlie scoring in all three victories in the series in which the Lions won 3-1.

After the 1899 rugby tour, he remained in Brisbane playing for the Valley District Cricket Club and turned out for a single cricket match for Queensland, when he scored 10 runs and bowled 12 overs for 67 runs but no wickets. He was described as a left handed batsman and bowler.
Shortly after this he enlisted with the Fourth (Queensland Imperial Bushmen) Contingent and, as Private 273, departed for South Africa (Boer War) on May 18th 1900. He departed Pinkenba (Brisbane port) on the SS Manchester Port, arriving at Beira on 14 June 1900. He proceeded to Port Elizabeth (20 June) and then Cape Town, disembarking on 23 June 1900. He was quickly promoted to Corporal on 1 June 1900 and Quarter Master Sergeant on 6 April 1901. Having served in the Boer War Charlie was discharged in South Africa and returned to England on 5 August 1901.

On his return to Britain, Charlie continued playing rugby and during the 1901-02 season represented Bristol. 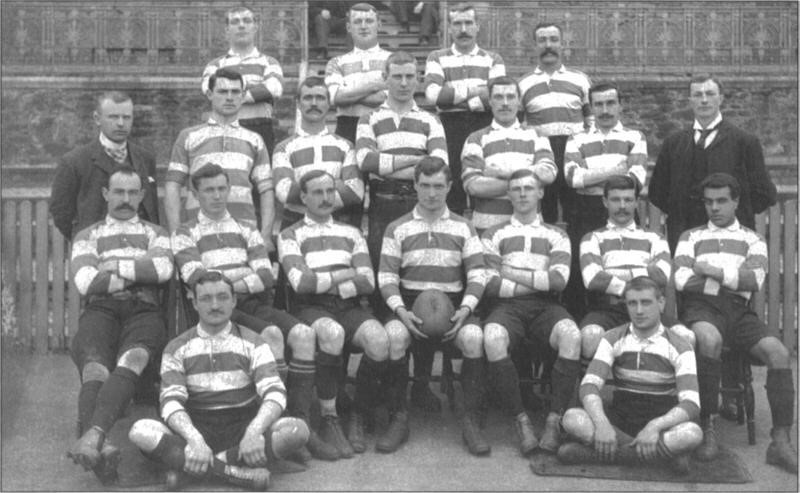 Above is the Bristol squad of 1901-02 with Charlie third from the left on the seated row; Charlie played alongside James Peters who was the first black player to play for England, making his England debut v Scotland on 17th March 1906.

Charlie returned to Durham and played for Durham County against the First All Blacks in their inaugural tour in 1905. The game took place at Hollow Drift on 7 October 1905, the All Blacks winning 16 – 3.

In the same year Charlie married Katherine Margaret Lodge, of Abergavenny and they soon started a family; Charles Lodge Adamson was born the following year and John Alfred Adamson in 1909. By 1911 the family were living in Nevilles Cross with their servant and Charlie was recorded as a Stockbroker.

His cricketing career continued. He played for Durham CCC against South Africa on 25/26 July 1907 and captained the side against Australia on 9/10 August 1912, scoring 65 of the 138 runs.

The family then made a return visit to Australia; they can be found on the passenger lists of the White Star Dominion Line ship “Runic”, making a return voyage from Melbourne to London on 1 July 1913.

It seems he was also a hotel proprietor, as following his death, a notice was posted in the Gazette advising that effective 23 October 1917 the partnership of John Adamson, William Henry Wood and Charles Young Adamson, trading as hotel proprietors and spirits merchants of Durham was dissolved.

His experience in the Boer War stood him in good stead when he was commissioned in 1915. Charles Young Adamson is listed in the London Gazette of 20 January 1915 as Temporary Quartermaster, with the honorary rank of Lieutenant, 23rd Battalion (4th Tyneside Scottish), Northumberland Fusiliers. He then serves as Captain with the 6th Battalion, Royal Scots Fusiliers. The 6th Battalion was amalgamated with the 7th to form the 6th/7th Battalion in May 1916 and then reduced to a Training Cadre in June 1918. Before then he was posted to Salonika with the 8th Battalion.

He died on 17 September 1918 at the age of 43, just two weeks before armistice. He was killed during the Second Battle of Doiran during an attack by his battalion on the Bulgarian trenches called The Tongue, The Knot and The Tassel during which the 8/Royal Scots Fusiliers suffered 50% casualties. Charlie is buried in Karasouli Military Cemetery, Salonika, Greece [Grave No F.1293] where his headstone carries a cross and the inscription “I Believe in the Communion of Saints”.