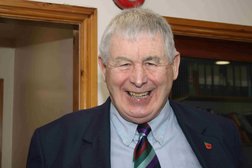 A legend in rugby circles, Fergus began his rugby career at the age of 21, when his first wife bought him his kit and sent him down to Durham City to play. Taken under the wing of Henry Barrie and Frank Carter, Fergus made his debut for our IV team and from that moment on, rugby became his driving passion.

A strong player, he put his heart and soul into every game and worked his way through the teams to become a 1st XV regular. During the 1970s Fergus was head hunted for a brief spell at West Hartlepool RFC, but having endeared himself to club and committee there, Fergus returned to City to see out his playing days for his home club.

Hanging up his boots led Fergus to focus his attention on nurturing young players. In the 1990s he volunteered his services to help Edward Wood coach rugby at Durham University, joining Durham County RFU as the University Representative in 1999. Adored by hundreds of students for his no nonsense approach to constructive, skillful rugby, he was elected as DURFC President, and in 2018 was recognised by the RFU with their most prestigious university rugby commendation, the 'Vaughan Parry Williams Award' for overall contribution to the student game. This role also saw Fergus involved with the County Colts and U20s and North of England selectors. Having had a difficult childhood himself he gave freely and generously of his time, money and wisdom to help youngsters from across the region.

Remaining a staunch City supporter, Fergus became Club President in 2004 and was awarded honorary life membership in 2007, and was always to be found on the sidelines supporting our boys. Despite his ill health last season he still travelled to our away games throughout Yorkshire and was often to be found at the back of the bus amongst the players leading a rousing chorus of ' As I was walking through a wood ' !

Fergus touched so many lives, he really was a true legend of the game and was loved by everyone who knew him. A giant in every sense of the word, he leaves a huge hole in the fabric of our club and will be very much missed.

Funeral arrangements will be shared in due course, but sadly current circumstances mean that it may be some time before we can come together as a rugby family to celebrate and commemorate Fergus' life and his commitment to the sport that he so loved. However, the time will come when we are all able to join together in a fitting tribute to our friend.

Until then, our thoughts are very much with his wife, Diane, and his two daughters and his grandchildren at this very difficult time.