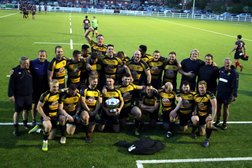 Up front it was a hard, physical, bruising contest throughout with honours just about even, but it quickly became apparent that Westoe were unable to cope with the pace and purpose of City’s backs, the reward for which was 6 excellent tries, most starting from depth.

The first came after just 4 minutes as they turned over Westoe possession and centre Brad Pears broke away to race home from 60 metres. Scrum-half Paul Armstrong converted, but Westoe’s response was almost immediate as they drove from a 5 metre lineout for No.8 Sam Gaffe to spin and force his way over. Stand-off Andy Sutherland converted to level the score, but from there City produced a further 3 tries before the interval with some outstanding running that effectively secured the outcome.

Stand-off Craig Dominick broke and brushed off three tackles to blast over from 25 metres for the first of them after 16 minutes. Armstrong converted and, after exchanging penalties with Sutherland, then broke sharply himself on a 40 metre run before off-loading to winger Matthew Ward who weaved his way to the line from 35 metres. Again Armstrong converted and, as half-time approached, another great attack saw winger Nathan Bushnell go 30 metres to the corner for supporting hooker Kenny Reader to score and put them firmly in control at 29 – 10.

Any doubt that may have existed about that was dispelled from the second-half kick-off however. An Armstrong box-kick was gathered in the air by Ward who set off on a 40 metre run through a retreating defence before cleverly off-loading near the line to supporting flanker Paddy Dias, in his final match for City, for their fifth try which Armstrong duly converted.

Despite the scoreline however, there was never any hint that Westoe had abandoned hope. Now with the wind behind them, they piled into City in the forward exchanges, camped in City territory for most of the second period, got a try after 62 minutes while City were reduced to 14 men through replacement Haydn Richards as they drove infield from a lineout which Sutherland converted, but otherwise were unable to make an impression on a rock-solid City defence.

The threat of a City breakaway was always there however and in the final minute it duly arrived as they turned the ball over from a Westoe attack and Dominick fed full-back Josh White who raced 60 metres down the right to score at the posts for Armstrong to again convert and provide a fitting finale to an excellent season and performance on the night.