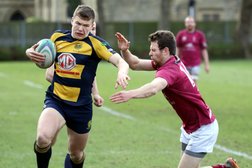 With three matches left, the Durham & Northumberland 1 League title could still be grabbed by any one of Durham City, West Hartlepool or Northern who are separated by only 2 league points.

With three matches left, the Durham & Northumberland 1 League title could still be grabbed by any one of Durham City, West Hartlepool or Northern who are separated by only 2 league points. For the moment, City remain on top, but much will depend on the next two games at home to second-placed West and then away to Stockton in fourth who overcame them earlier in the season.

A spirited performance by Medicals who led 10 – 0 after 10 minutes and held City to 21 – 21 at the half-hour mark before throwing caution to the wind in the last quarter in search of a four-try bonus point, never looked like being enough against a City side who, despite ill-discipline, always had too much power and pace for their hosts as they ran in 12 tries.

An interception and 60 metre dash by flanker Hamish Graham gave Medicals their early lead, stand-off Adam Heaps converting and then kicking a penalty before a break by centre Craig Dominick, which full-back Josh White finished off for scrum-half Paul Armstrong to convert, got City going.

No.8 Peter Dent and Dominick added two more for City, Armstrong converting, but Medicals were still right in it at the half-hour mark, centre Harry Sagar having got their second try and Heaps adding 2 more penalties to level the score at 21 – 21.

From there though, a City surge took them well clear. Stand-off Arnie Stevenson broke to score at the posts, winger Garry Izomor forced his way over, Armstrong converting both to give them a 21 – 35 lead at the interval before they ran away with it in the second half, centre Brad Pears scoring in the opening minute, Dent getting his second, prop Reece Amir diving over and replacement winger Matthew Ward stepping well to score on his debut. Armstrong converted two of them and suddenly the score was up to 21 – 59.

Medicals rallied however, running everything from the numerous penalties City conceded for prop Richard Clegg to eventually force his way over for their third try which winger Henry MacGuinness converted and, after Izomor had got his second, Armstrong again converting for City, the hosts finally got their reward when Clegg got his second try from close-range which MacGuinness converted.

The final words were deservedly City’s however as flanker Howard Johnson scored and hooker Kenny Reader claimed their twelfth try of the match which Armstrong converted to take his tally to 10 for the day.