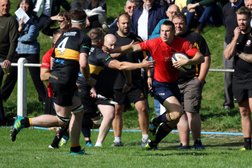 Restored to the North 1 East League after promotion, Durham City began the new season in fine style at Hollow Drift against visitors Kendal.

Based on dominant scrummaging and good loose play, they played expansive rugby throughout scoring seven tries to one and went ahead as early as the second minute, 6 or 7 phases from the kick-off and a break by winger Nathan Bushnell opening the way for the ball to be swung wide and stand-off Charlie Scott taking an inside pass from winger Tom Elliott to touch down. Scrum-half Paul Armstrong converted and they were on their way.

Such was their early control, 7 minutes had gone before the visitors won their first possession, but it was not until the 25th minute that they added to the score, hooker Richie Thirkell forcing over after a 5 metre scrum. Armstrong again converted and whilst Kendal came into the game more in the second quarter, a couple of missed penalty chances did not help their cause.

Two more City tries in the 3 minutes before the interval effectively settled the outcome however. First, full-back Josh White intercepted as Kendal attacked and raced 75 metres to score, Armstrong converting, and then a break by centre Craig Dominick and quick re-cycling allowed Elliott to score in the right corner to give City a commanding 26 – 0 interval lead.

A fine 40 metre break by Dominick gave them their fifth try quarter of an hour into the second half and 5 minutes later he ran on to a ball hacked ahead to feed replacement winger Sam Heron for the sixth. Armstrong added the conversions to stretch the lead to 40 – 0, but determined forward play by the visitors gave them a measure of compensation as lock John Dervey forced his way over for a try after they attacked from a quickly-take penalty and 3 or 4 phases took play to the City line.

But the home reply was almost immediate, a chip over the Kendal defence allowing Heron to run on to the ball and score his second and the final try in the corner.

Undoubtedly, there will be tougher tests to come for City, but with some new additions to the squad, all of whom impressed, and others still to return to the fray, it augurs well for a good season.