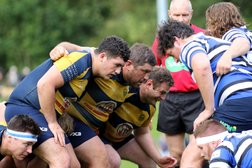 Having dispatched Kendal with a comfortable 45 – 5 victory the previous week, Durham City were very quickly reminded by Driffield of the higher standard of rugby required in the North 1 East League.

A poor start allowed the visitors to sweep into a 19 – 0 lead within the opening 15 minutes and from there it was an uphill battle to get into contention. That they did, at one point closing the gap to just 4 points, spoke volumes for their resolve and determination, but a superbly organised and obdurate Driffield defence withstood virtually everything that was thrown at them, despite picking up three yellow cards along the way, and then as a team having the ability and pace to counter- attack almost immediately and open the gap again.

Three tries in a devastating 5 minute spell of running through winger Ben Dinsdale, centre Gary Stephenson and James Dinsdale, two of which full-back James Watts converted, ripped the home defence apart and things looked ominous. But then City started to settle, a penalty by full-back Josh White getting them on the scoreboard but unable to breach the Driffield defence until 4 minutes before the interval when a good counter-attack ended with a chip over the defence by stand-off Charlie Scott for winger Nathan Bushnell to run onto and score to reduce the half-time deficit to 8 – 19.

A try 3 minutes after the re-start from huge City pressure and series of rucks on the visitors’ line by scrum-half Paul Armstrong converted by White got them back to within 4 points of the visitors, but the response was immediate, a poor box-kick allowing Driffield to run from their own half and lock James Dinsdale finishing off a fine counter-attack with his second and his team’s bonus-point fourth try which Watts converted.

A third City try through lock Kevin Showler followed, again from huge forward pressure on the Driffield line, but once again they were caught by counter-attacks, firstly as Driffield swept upfield creating a big overlap for flanker Alex Cullen to finish it off, and then from another which ended with a crossfield kick for winger Harry Jackson to score with Watts adding the conversion to stretch their lead to 20 – 38.

Finally though, in the last couple of minutes City managed to breach the defence of the visitors’ backs when centre Craig Dominick broke to score from a scrum 15 metres out to secure their try- bonus point which White converted, only for Driffield to have the last word and register a well-deserved win when they created another overlap from the re-start for Stephenson to add his second try.

City travel to Morley for the next game on Saturday.