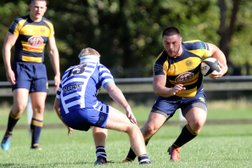 After a couple of defeats, Durham City returned to winning ways with a bang against Yorkshire visitors Pocklington.

After a couple of defeats, Durham City returned to winning ways with a bang against Yorkshire visitors Pocklington. Three first-half tries for a 22 – 3 interval lead set them on their way and they then ran amok in the second period to add a further six in an impressive all-round display.

Lock Chris Metcalfe led the way after just 5 minutes, driving over powerfully from the back of a lineout 15 metres out and minutes later, they turned over Pocklington possession in their own half and centre David Elliott broke to race 55 metres for the second.

Scrum-half Paul Armstrong converted both of them and whilst Pocklington produced a brief spell of forward pressure on the home line which yielded a penalty by full-back Christian Pollock, City quickly re-asserted themselves for winger Tom Elliott to force his way over for their third try as they moved the ball wide from a ruck. Armstrong added a penalty just before the interval and whilst a second-half comeback was always possible for the visitors, it looked unlikely.

Any hopes of that were dashed however immediately after the re-start as City piled the pressure on to add two more tries, Metcalfe forcing his way over from a ruck and winger Nathan Bushnell somehow recovering the ball to race behind the posts after a good run by David Elliott ended when he was stripped of possession by the Pocklington cover. Armstrong converted both tries and at 36 – 3, City were well out of sight and not finished.

Bushnell added two further tries for his hat-trick, replacement Garry Izomor supported a break by centre Craig Dominick to get on the scoresheet and although Pocklington got a little reward for forward pressure on the home line when awarded a penalty try, the final word was City’s as No.8 Peter Dent skipped over for their ninth try deep in injury time. With Armstrong converting 3 of the last 4 to take his match tally to 7 conversions and a penalty, this was a comprehensive victory.