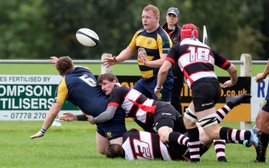 Sunk by a last kick-of-the-match penalty in injury time, Durham City can have little complaint about the final outcome of this North 1 East League match.

Sunk by a last kick-of-the-match penalty in injury time, Durham City can have little complaint about the final outcome of this North 1 East League match as a battling Malton side fought their way back from a 7 – 18 deficit and the loss of a player to a red card quarter of an hour into the second-half to grab the honours at the death.

The home side had started well, controlling the opening exchanges and moving into a 7 – 0 lead after 13 minutes when a drive from the back of a 5 metre scrum ended with hooker Matt Bowman scoring which stand-off James Bulmer converted.

But City slowly got into their stride, levelled the score after 21 minutes when some big attacks created pressure and reward with scrum-half Paul Armstrong nipping through a gap in the home defence from close range after good phase play from a lineout on the home 22. He converted and City seemed well in control.

A fine try by centre David Elliott taking a low pass and forcing past three defenders near the touchline as they counter-attacked from a Malton clearance kick moved them into the lead and when Armstrong added a couple of penalties, they appeared to be well clear at 7 – 18. But back came Malton with a second try for Bowman on the stroke of half-time as they drove from another 5 metre scrum to reduce the arrears to 12 – 18.

The Malton red card and another Armsrtong penalty for City seemed to bring an air of inevitability to the outcome, but the home side had other ideas. They upped the tempo, took the game to City and chipped away at the 9 point deficit. Scrum-half Paul Angus kicked a penalty to nudge them closer and, pressing strongly after 76 minutes, prop Peter Hopkins scored from a scrum near City’s line to reduce the leeway to a single point at 20 – 21.

Finally, as they pressed to the end, they got their reward as City offended at a ruck 21 metres out well into injury-time and Angus kicked the penalty to snatch victory.

On Saturday, City are at home to Bradford & Bingley in another league match.