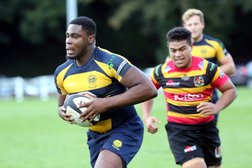 In an exciting, physical North 1 East League encounter at Hollow Drift, Durham City appeared to have learned a lesson from their defeat in a very similar scenario the previous week at Malton & Norton.

In an exciting, physical North 1 East League encounter at Hollow Drift, Durham City appeared to have learned a lesson from their defeat in a very similar scenario the previous week at Malton & Norton.

They led 23 – 20 with 20 minutes remaining before the visitors lost a player to a red card but rallied strongly to put City under severe pressure in the last few minutes. However, on this occasion the home side held firm to record a good win.

The visitors opened brightly, threatening the City line and going ahead with a penalty by stand-off Taylor, whose darting runs caused problems throughout, but City quickly responded, a good run by centre Brad Pears taking play almost to the Bradford line and a further couple of phases creating an overlap for winger Garry Izomor to stroll over for the first try.

Scrum-half Paul Armstrong added a penalty and with the forwards seeming to be getting on top in the set-pieces, memorably with one 15 metre scrummage drive, it looked as if they might pull away. But, after 22 minutes when a kick downfield forced a 5 metre scrum as City had to kick the ball dead, Bradford pounced, lock Tuipilotu forcing his way over at the posts for Taylor to convert and take an
8 – 10 lead.

Back came City though, Armstrong kicking a second penalty and winger David Elliott taking a long pass and forcing his way down the touchline on a powerful 25 metre run for their second try.

But, with Taylor kicking a second penalty just before the interval to reduce City’s lead to 16 – 13, the visitors were well in touch and it looked to be either side’s game.

A try by flanker Booth breaking off the back of a lineout 13metres out after 12 minutes of the second half and Taylor conversion put Bradford ahead again, but a fine run by City full-back Nathan Bushnell took play deep into their 22 and from the phases that followed, No8 Peter Dent scored from a ruck in the left corner, Armstrong converted for their 23 – 20 lead and from there, they saw it out as Bradford pressed in the tense final minutes.