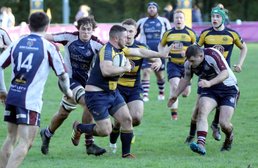 A closely-contested affair throughout, they held the initiative in the first half but solid defence by the visitors restricted them to a 3 – 0 interval lead, scrum-half Paul Armstrong having kicked a simple penalty after 12 minutes awarded following huge pressure on the Scarborough line.

But with the signs towards the end of the half that the visitors were starting to get the edge in the set-scrums, particularly after the retirement of City lock Chris Metcalfe through injury, it all came home to roost in the second half as three consecutive yellow cards reduced their ranks to 14 men for most of the period and Scarborough took full advantage.

A poor clearance kick straight after the interval allowed Scarborough to hoist a high ball back into City’s half and a fortuitous bounce left winger Jonty Holloway to gather and race over unopposed for the first try which centre Angus Frend converted and suddenly, they led 3 – 7.

A second Armstrong penalty a couple of minutes later narrowed the gap to 6 – 7 and so it remained until late in the half. But against a weakened City pack, the visitors were gained more and more ascendency in the set-scrums and the pressure mounted before the decisive 78th minute moment when replacement forward Jordan Holloway forced his way over for the visitors’ second try from strong pressure on the home line.

Frend again converted for a 6 – 14 lead, but the final word was City’s deep into injury-time as they swept upfield in perhaps the best attack of the match, replacement David Elliott racing 50 metres up the wing before the ball was quickly worked back the other way for Centre Brad Pears to score.

Armstrong converted, the losing bonus point was secured, but City were left to rue their indiscretions.