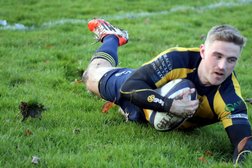 Having had most of the possession and territory throughout this North 1 East League match, Durham City will be disappointed with the eventual outcome of what was a closely contested affair.

Having had most of the possession and territory throughout this North 1 East League match, Durham City will be disappointed with the eventual outcome of what was a closely contested affair.

They grabbed the initiative in the first-half, scrum-half Paul Armstrong putting them ahead with a simple penalty following a strong run by winger Tom Elliott and stretched their lead to 10 – 0 shortly after, No.8 Peter Dent breaking clear in the loose to go 20 metres before off-loading the ball for centre David Elliott to score.

Armstrong converted and despite some threatening attacks by Park, City seemed to have a tenuous control of the match. A second penalty was added 10 minutes before the interval by Armstrong , but as they came under heavy pressure from the home pack as the half came to an end, they were powerless to stop a concerted catch and driven lineout from 10 metres out, flanker Leo Caulfield scoring and stand-off Ashley Smith converting to close the gap to 7 – 13.

A break by lock Dominic Warby to 10 metres out and the penalty that resulted allowed Armstrong to stretch the lead again to 7 – 16, but Park’s response was almost immediate. A missed City touch kick was run back at them and centre Seb Reece scored a good try wide on the left which Smith converted to reduce City’s lead to 2 points. For much of the half thereafter, City pressurised the home side in their own half but were unable to find a way through an impressive defence and almost inevitably the sucker punch came when scrumhalf Ruairi McHarg broke from his own 22 before feeding winger Ali Blair who raced home to score from 50 metres to score a fine trey. Smith converted, Park led and despite huge pressure from City to the end, the home defence held firm.