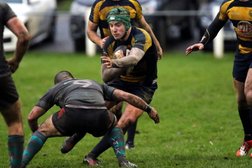 After a run of three defeats, Durham City got back to winning ways in the North 1 East League with this victory over bottom club Huddersfield YMCA.

After a run of three defeats, Durham City got back to winning ways in the North 1 East League with this victory over bottom club Huddersfield YMCA. Dark and damp conditions almost pre-determined that attritional rugby would be the order of the day and so it proved generally, although in fairness both sides tried to play an expansive game with varying degrees of success.

City led from the opening minute, a penalty following the kick-off allowing scrum-half Paul Armstrong to put them ahead, but whilst the early exchanges were controlled by them, they were unable to take advantage of a Huddersfield yellow card after 7 minutes and the visitors duly replied with a penalty by stand-off Nathan Chappell as soon as their numbers were restored.

For the next quarter of an hour Huddersfield controlled the game, forcing City back and going ahead after 20 minutes when livewire scrum-half Sam Fletcher broke through a City lineout 18 metres out to score a fine individual try.

But City responded quickly. Twice very promising attacks when they ran were foiled by the game being stopped for injuries to visiting players before they finally went over for their first try after 31 minutes, a good scrum 22 metres out providing the platform for the backs to run and a half-break allowing full-back Nathan Bushnell to score wide out. Armstrong converted and City led again at 10 – 8.

Huge pressure on the Huddersfield line in the minutes before half-time was resisted by the visitors, but finally the dam broke with the last play of the half as City ran from a scrum 8 metres out and Centre Craig Dominick fed partner Brad Pears for their second try and a 15 – 8 advantage.

A good break and run by Pears straight after the interval should have resulted in a further try, only for the final inside pass to be dropped and thereafter City were bedevilled by a number of forward pass decisions when scores seemed probable as the half went on. Always in the hunt, Huddersfield ran from depth on several occasions as they tried to close the gap, but City held the upper hand and a second penalty by Armstrong turned out to be the only further score in a game which, overall, they deservedly won.