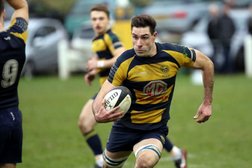 Durham City always held the initiative in this North 1 East League derby match, but having established an early 15 – 0 lead they eventually pulling away to a comfortable victory in a fine all-round performance with four tries in the last 20 minutes.

Durham City always held the initiative in this North 1 East League derby match, but having established an early 15 – 0 lead and being well in control, they were hauled back by a competitive West Hartlepool side before eventually pulling away to a comfortable victory in a fine all-round performance with four tries in the last 20 minutes.

They started well, going ahead after just 3 minutes with a try by left-winger Ellis Hook, the ball having been moved wide from a scrum on the right, added a penalty through scrum-half Paul Armstrong a couple of minutes later and a second try through centre Craig Dominick from a series of rucks on the West line.

But as they continued to press, an interception by West centre Harry Mayes saw him go 70 metres for a try which stand-off Stuart Waites converted before adding a penalty and suddenly, West were right back in the mix at 15 – 10.

However, a try by Dominick just before the interval, despite the loss of a player to a yellow-card, when they ran following a lineout and Armstrong conversion opened the gap again in City’s favour to 22 – 10, but it was not until the last quarter of the match that they made certain of the outcome, full-back Nathan Bushnell scoring two tries, firstly being driven over after a good run and then finishing off a sweeping attack for the second.

Armstrong converted one of them and City were now rampant, No.8 Peter Dent scoring from a 5 metre driven scrum and finally, Dominick securing his hat-trick when an excellent attack which started in their own 22 with a Bushnell run, followed by a burst up the middle by flanker Howard Johnson and quick ruck ball opened the way for the centre to finish it off.

Armstrong converted the final try to round off a victory in which the margin may have flattered City a little, but the merit of it could not be denied.