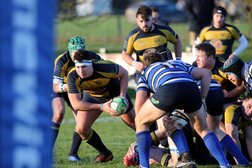 Looking to pull away from the relegation zone, Durham City will take heart from this result against North1 East League leaders Driffield

Looking to pull away from the relegation zone, Durham City will take heart from this result against North1 East League leaders Driffield and, having led by 7 points going into the last couple of minutes, even be a little disappointed they were unable to hold out for a victory.

They started disastrously. Playing with a firm wind behind them, a dropped ball in the very first minute allowed Driffield’s speedy backs to hack through from 60 metres for centre Ben Dinsdale to outstrip the cover and put his side into a 5 – 0 lead.

Despite that setback and having to re-organise the backs when centre David Elliott retired after 10 minutes, City responded positively, the forwards starting to take a grip on proceedings, particularly in the lineout, and the wind being used to advantage positionally before they got their reward.

A break after 16 minutes by scrum-half Paul Armstrong, now playing at stand-off, opened the way for some good phase play to take the ball to the Driffield line where finally No. 8 Peter Dent broke the defensive cover and off-loaded to lock Dominic Warby to score. Armstrong converted, City led 5 – 7 and they should have added to it a few minutes later when they were over the home line when driving off the back of a 5 metre scrum only for the ball to be dropped.

A penalty after 32 minutes by Armstrong did extend their advantage however, but the threat of the Driffield backs could never be ignored and at times some fine defending was needed to keep them in check.

The question at the interval was whether a 5 point City lead would be enough with the wind to face. But, after 8 minutes of the second half, they extended it to 10 points, a huge 30 metres driving maul from a lineout and numerous phases near the home line ending when replacement flanker Howard Johnson forced his way over for their second try.

But back came Driffield. Scrum-half James Watts banged a penalty over from 40 metres after 60 minutes, they survived big City pressure near their line two or three times and, with 2 minutes remaining, got their reward when they took play to the City line and, after 3 or 4 forward drives, replacement forward Dan Maling finally scored and Watts converted to secure a share of the honours.