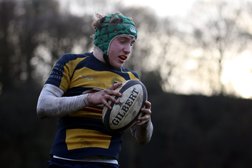 A solid, workmanlike performance by Durham City saw them prevail in this tight North 1 East League match against Leeds side Morley.

A solid, workmanlike performance by Durham City saw them prevail in this tight North 1 East League match against Leeds side Morley.

After a fairly lacklustre first-half performance in which they were forced to defend for long periods as the visitors controlled possession and played patient phase rugby to build a 5 – 14 lead, they managed to keep in touch with a try just before the interval to cut the deficit to 12 – 14 and, with better second-half control, particularly in the lineouts, got themselves in front and built an 8 point lead which proved critical at the end.

Morley started smoothly, building pressure before centre Andy Ellis went over under the posts from a scrum after 7 minutes and stand-off Mark Chester converted.

But City quickly replied, albeit a little fortuitously, when No.8 Peter Dent stole a Morley lineout 5 metres from their line and prop Will Elliott supported to score in the corner.

Still dominant though, Morley’s patience paid off again when, after 7 or 8 phases, a kick over the home defence to the in-goal area allowed flanker Lewis Roxby to score. Chester again converted and they looked well in command.

But City really started to build in the 5 minutes before the interval. They pressed near the Morley line, the visitors c