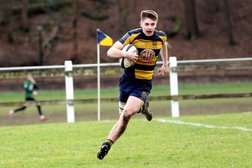 Never a classic for spectators, this was a match Durham City could ill-afford to lose as they battle to move away from the nether regions of the North 1 East League.

Never a classic for spectators, this was a match Durham City could ill-afford to lose as they battle to move away from the nether regions of the North 1 East League and they duly delivered. In truth it was a generally scrappy affair but one which, having taken the lead after half an hour, they never really looked likely to lose.

They went behind in the 8th minute when early Malton pressure and City indiscipline gave the visitors a 5 metre lineout which they caught and drove for hooker Bailey Lamb to score. Scrum-half Paul Angus converted from the touchline for their early lead. But 4 minutes later, in similar fashion, City were back on level terms as they drove a lineout from 15 metres out to the Malton line and scrum-half Simon Ord did well to burrow his way over for the try which stand-off Paul Armstrong converted.

Now starting to play with better continuity, City slowly began to get the upper hand. Armstrong added a penalty on the half-hour mark to nudge them ahead, Malton had a player yellow-carded 5 minutes later and City immediately stretched the lead to 17 – 7 when a long clearance kick by centre Brad Pears was run back at them by the visitors only for a pass to be dropped allowing City winger Ellis Hook to pick up and weave his way to the posts from 30 metres out for their second try which Armstrong again converted.

Five minutes after the interval, the outcome was pretty much settled with a fine City try as they worked the ball right from a scrum and then back the other way with some good handling between flanker Craig Dominick, centre Garry Izomor and Pears who burst on to a short pass to blast through the visitors’ defence to score. Armstrong was on target again and at 24 – 7 City were well clear.But back came Malton. Winger Ali Fothergill went close a couple of times with strong runs as the visitors mounted some pressure on a City defence which did not help itself by picking up two consecutive yellow cards.

Seven minutes from the end, Malton got their reward, Fothergill scoring in the corner, but the final word was City’s in injury time, as they brought the ball back inside having driven down the right touchline for replacement hooker Will Elliott to burst clear from 18 metres to score under the posts and secure a vital try bonus-point. Armstrong’s fourth conversion completed a satisfactory afternoon for the home
side.